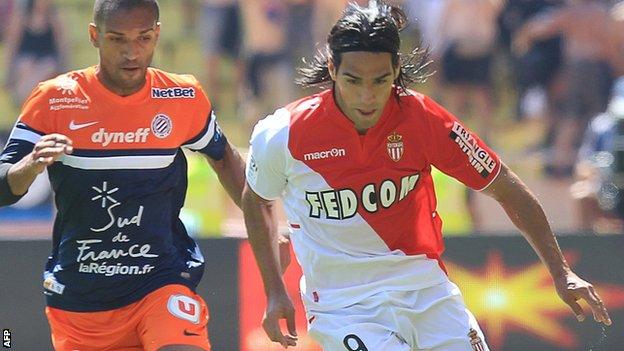 Monaco star Radamel Falcao has rejected claims he is set to leave the Ligue 1 club less than three months after his £51m move from Atletico Madrid.

Reports in Spain suggested the Colombia striker, 27, wanted to leave the newly promoted side over proposals to cut his tax-free salary.

Falcao scored his second goal in two matches with a penalty in Monaco's 4-1 win against Montpellier on Sunday.

"Everything is false. I believe in the project and I'm staying," he said.

The ex-Porto striker joined the big-spending French league club, who are being bankrolled by billionaire Russian businessman Dmitry Rybolovlev, after becoming one of the most sought-after players in Europe.

He scored 32 goals for Atletico last season and was heavily linked to Premier League duo Chelsea and Manchester City, along with Spanish giants Real Madrid.

The trio are reported to have renewed their interest following the latest speculation over his future, although Monaco boss Claudio Ranieri insists his prized asset, who recently became a father, is happy at the club.

"They are just rumours, always rumours and just to make up stories," said the Italian coach. "Falcao is staying here, he's happy and his daughter was born here."