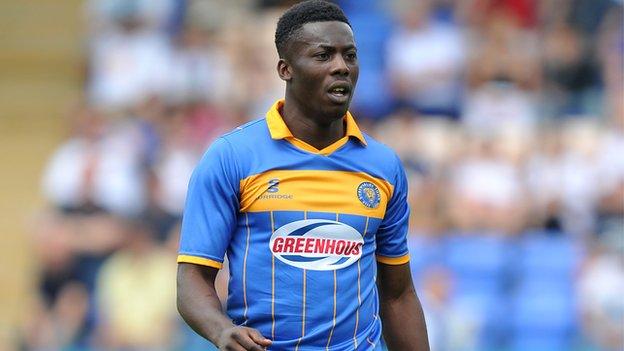 Birmingham City have recalled striker Akwasi Asante from his loan with League One side Shrewsbury Town.

Nikola Zigic (back) is ruled out until after next month's international break.

And with no Blues player having yet found the net in three league games this season (their strike in the 1-0 win at Yeovil was an own goal) Blues boss Lee Clark has brought back Asante.

After missing their first two matches with a hamstring injury, Asante, 20, returned for Shrewsbury on Saturday.

He played a key role in a 2-0 home win over Swindon Town for a Town side who had failed to score in their opening two matches of the campaign.

Asante, who returned to Shrewsbury for a second spell on a youth loan on 14 July, had been expected to stay on a lot longer at the Meadow.

"Initially we were looking at a loan until Christmas for him," said Town boss Graham Turner.

"But Birmingham changed their mind and wanted us to take him when we did, which was 28 days ago, so if anything happened at their club they had the opportunity to call him back fairly early in the season and unfortunately that's what they've done."

Asante's youth loan would have expired when he turns 21 on 22 September, so a new deal would have had to be agreed between the clubs. But, with Peter Lovenkrands having picked up a slight niggle in training, the Dutch-born Ghanaian now suddenly finds himself in Birmingham boss Clark's plans for this weekend's trip to Leicester City.

Last season's top scorer Marlon King, who still has a year remaining on his contract, has so far not figured for Blues this season, as the cash-strapped Championship club look to offload him from their wage bill.

The club's website says he was "informed that he was free to talk to other clubs at the end of last season due to the club's financial predicament".