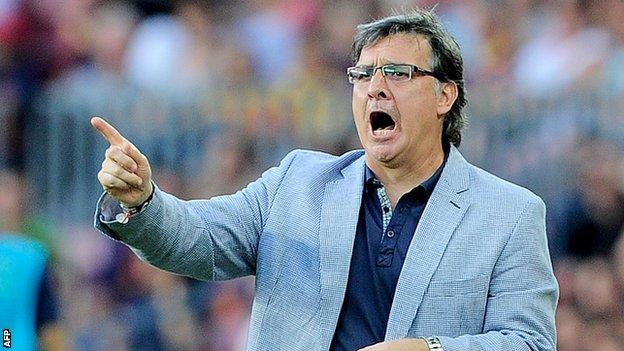 Lionel Messi and Pedro scored twice, with Alexis Sanchez, Dani Alves and Xavi adding the rest at the Nou Camp.

But Martino said: "We can prolong our pressure and we can continue to look for alternatives when we go forward."

The Argentine, 50, is tasked with retaining the Spanish crown for the Catalan giants after they finished 15 points ahead of arch-rivals Real Madrid last season.

And his players made a blistering start to their title defence as they tore apart a poor Levante side.

Barca led 6-0 at the break before Spain attacker Pedro added another in the second half.

"I was anxious for the league to start to see where the team were and I have been left very calm," said ex-Paraguay boss Martino.

"It's very premature to make an analysis after only 90 minutes. We have to play more matches in order to truly see how we are doing."