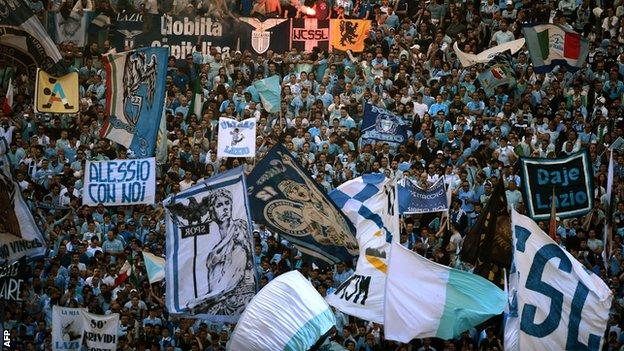 Italian side Lazio have been ordered to close part of their home ground for the opening Serie A weekend as punishment for alleged racist chanting by fans.

League bosses have shut the north stand of their Olympic Stadium for Sunday's visit of Udinese after Juventus players were abused in the Supercoppa final.

Paul Pogba, Angelo Ogbonna and Kwadwo Asamoah were all targeted during Lazio's 4-0 loss at the weekend.

"We heard it, they're ignorant," said former Manchester United midfielder Pogba. "What can I do? I'm alone against 30,000 fans. They do that even though there are black players in their team.

"It's also a lack of respect towards their own players. It's really not nice to come to a football match and hear those sorts of things, but I'm a player, I concentrate on my job."

In February, the Rome club were ordered to play their next two home European games behind closed doors following crowd trouble.

They were also fined £120,000 by Uefa following racist chanting in a Europa League game against Tottenham Hotspur.

"(Lazio) are obliged to play one game with the 'Curva Nord' closed to spectators," said a statement published on Serie A's official website.

"Fans from the nominated stand directed racially discriminatory chants to three opposition players between the 16th and 28th minutes of the first half and the 20th to 43rd minutes of the second half."

Lazio's city rivals Roma, who also play in the Olympic Stadium, have already been punished with a partial stadium closure after fans racially abused AC Milan striker Mario Balotelli in May.

The heavier sanctions have been made possible by new anti-racism legislation passed by the Italian Football Federation on 4 June. Referees can now stop matches to allow fans to be warned about their behaviour, while clubs and individuals face increased fines and longer suspensions.

AC Milan midfielder Kevin-Prince Boateng walked off the pitch after being racially abused by Pro Patria fans in January, while team-mate Kevin Constant did the same during a pre-season tournament last month.

Both Lazio and Juventus were also handed additional 5,000 euro (£4,300) fines after supporters from both clubs were seen throwing smoke grenades and lighters on to the pitch during Sunday's traditional season opener between the previous campaign's league and Coppa Italia winners.