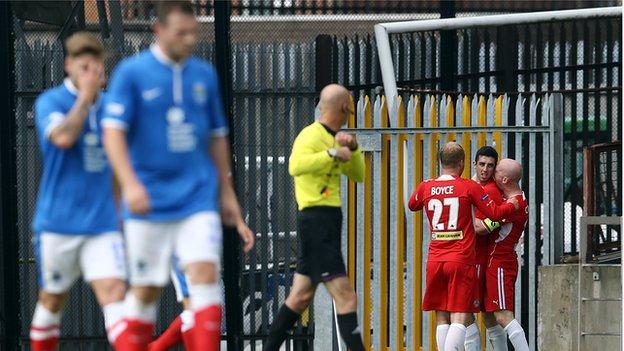 David Jeffrey says the 4-2 defeat by Cliftonville has shown his Linfield players how much work they must do to close the gap on the champions.

Last April Linfield, double winners for the previous three seasons, finished 29 points behind Cliftonville and this season they are already five adrift.

"We have a new group of players. This showed them where they are compared to Cliftonville," said Jeffrey.

"We were guilty of schoolboy defending and were punished for our mistakes."

"The Cliftonville match was a harsh lesson for our new set of players - probably their first big setback," added Jeffrey.

"At 2-2 we were in the ascendancy but we then inexplicably made errors at the back and Cliftonville showed some clinical finishing.

"We now look ahead to Crusaders next week and that is going to be another tough challenge. "

Jeffrey revealed that two of his big close-season captures - striker Andrew Waterworth and defender Mark Haughey - were still out injured.

Waterworth broke a leg bone in a Europa League game while former Glenavon man Haughey was injured in pre-season.