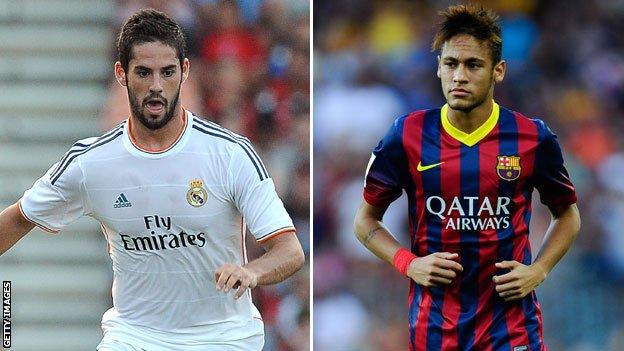 There was a predictable start to the new La Liga campaign this weekend as title contenders Barcelona and Real Madrid both kicked off with victories.

Reigning champions Barca walloped hopeless Levante 7-0, while Madrid overcame a spirited Real Betis side with a late winner from Isco.

However, the forthcoming season offers plenty of intriguing, novel elements to the Clasico rivalry, starting with the arrival of two new managers in the form of Tata Martino and Carlo Ancelotti.

Martino's appointment at the Nou Camp in place of Tito Vilanova, who was forced to resign through illness, will not change a great deal.

The experienced Argentine is an open admirer of the Catalan club's tiki-taka methods, and is focusing his training-ground efforts on restoring the team's ability to pressurise opponents deep inside their half and therefore gain possession as close to goal as possible.

Ancelotti's tactical impact at Madrid will be far greater.

Under predecessor Jose Mourinho, the Bernabeu side adopted a counter-attacking style based on organisation, pace and power. It was never a particularly popular approach with a demanding set of supporters - who are accustomed to a greater degree of flair and flamboyance - and Ancelotti has already spoken of his desire to instil a more exciting brand of football.

Perhaps more interesting than the identity of the managers, however, is the fact that both squads contain a number of promising young players who are aiming to freshen up the Clasico rivalry by making their mark at senior level.

The most high-profile example is at Barcelona, where Brazilian boy wonder Neymar has arrived from Santos to a great fanfare as he attempts to lessen the burden carried by Lionel Messi - both on the pitch by distracting opposition defenders and off it with his ability to act as the face of the club's ambitious marketing strategy.

A slender but talented midfielder who has already been compared to Andres Iniesta and Xavi, even though he's not yet started a league game at senior level. Atletico boss Diego Simeone is determined to give 18-year-old Torres the necessary space to develop gradually, but he could see significant playing time in the Champions League.

The Basque club are hoping that the loss of Asier Illarramendi to Real Madrid can be offset by the continuing emergence of this 20-year-old passing midfielder, who has starred for Spain at various underage levels and has long been regarded as a major talent in the making. Now is the perfect time for him to prove those predictions right.

After bursting onto the scene a couple of years ago, tiny but tenacious playmaker Muniain was a big disappointment last season. But the same could be said for the entire Bilbao squad, who struggled with the physical demands imposed by now-departed boss Marcelo Bielsa. Muniain - still only 20 - gave an early indication he's ready to bounce back by scoring the winner in Saturday's season opener at Valladolid.

But Neymar will not be allowed to think for one second that he can come anywhere close to matching Messi in terms of star billing.

Perhaps his greatest challenge - even bigger than adapting to his new team's playing methods or the faster pace of the European game - is his need to strike the right balance between serving his Argentine team-mate and finding room for self-expression.

Understandably, Barcelona's strategy is unapologetically based on getting the best out of Messi.

They believe he is the best player in history and therefore everything they do is directed at maximising his opportunities to score goals and win matches. For all his undoubted individual ability, Neymar will have to fit into that line of thinking and accept a support role.

As you would expect from a club boasting such a rich recent history of developing its own players, Neymar isn't the only talented youngster hoping to make an impact, with a batch of homegrown talent on the cusp of becoming key performers for Martino's side.

For starters, Neymar is likely to share playing time with 22-year-old Cristian Tello, a fast and penetrating - but frustratingly inconsistent - winger, who marked his full international debut with a bright performance in Spain's victory over Ecuador last week.

In midfield, Barca are looking towards Sergi Roberto and Jonathan Dos Santos (the younger brother of former Tottenham forward Giovani) to compensate for the departure of Thiago Alcantara to Bayern Munich, while right-back Martin Montoya and central defender Marc Bartra are entering pivotal seasons in their quest to become first-team regulars.

At Real Madrid, meanwhile, the emergence of a number of gifted young stars is an even more alluring prospect.

The Bernabeu club have been notably poor at pushing through players from their own academy in the last decade or so, with Iker Casillas the most recent to develop from the youth set-up and truly establish himself in the first team.

That could all be about to change, however, with new boss Ancelotti seeking to dispel the negativity of Mourinho's final few months in charge by adopting a policy of filling his team with a healthy contingent of young Spaniards.

The first to benefit has been right-back Dani Carvajal, who initially joined Madrid at the age of 10, was re-signed in the summer after spending just one season at Bayer Leverkusen and has already been elevated to the starting line-up ahead of Alvaro Arbeloa.

Another youth-team product set for extended playing time is Alvaro Morata. The 20-year-old striker - athletic, mobile and intelligent - made a handful of first-team appearances last season before catching the eye by leading the scoring charts with four goals in Spain's Under-21 European Championship triumph this summer.

The departure of Gonzalo Higuain will allow Morata to serve as primary back-up to Karim Benzema, and there could also be opportunities for another young forward, Jese Rodriguez, who scored 22 goals for the club's B team last season and has already received public praise from Ancelotti.

With the versatile Nacho Fernandez ready to serve as defensive back-up, Brazilian Casemiro doing the same in midfield and young Frenchman Raphael Varane poised to continue the highly impressive progress that saw him become a first-team regular towards the end of last season, it's becoming increasingly clear that Ancelotti's Real Madrid will have their most youthful look for many years.

But the most exciting rising star of them all could well prove to be Sunday's match-winner Isco, a summer recruit from Malaga who wowed Europe with some scintillating performances in last season's Champions League campaign and won the 2012 'Golden Boy' award for the continent's most promising young player.

If he comes anywhere near fulfilling his enormous promise, he could become a decisive factor in bringing the La Liga trophy - and possibly even the Champions League crown - back to the Bernabeu.