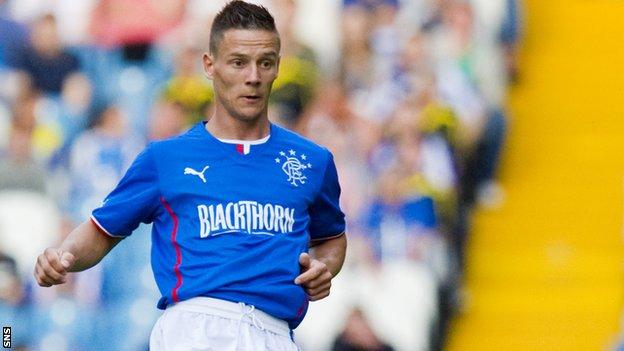 Rangers midfielder Ian Black has been issued with a notice of complaint by the Scottish Football Association for allegedly betting on matches.

A Rangers spokesperson said: "The club is aware of the SFA's notice of complaint and are currently investigating the matter."

Black has until 26 August to respond.

The former Hearts and Inverness CT midfielder has also been charged with breaching the SFA's disciplinary rule 22 by "betting on a further 10 football matches that involved then registered club".

Disciplinary Rule 22 has been allegedly breached by:

* Betting on three football matches on then-registered club not to win.

* Betting on a further 10 football matches that involved then-registered club.

* Betting on a further 147 football matches.

The SFA's Disciplinary Rules 23 states: "No club, official, team official, other member of team staff, player, match official or other person under the jurisdiction of the Scottish FA shall knowingly behave in a manner, during or in connection with a match in which the party has participated or has any influence, either direct or indirect, which could give rise to an event in which they or any third party benefits financially through betting."

Black moved to Ibrox in July 2012 after his contract at Hearts expired. He joined Inverness in 2004 and spent five seasons with the Highland club before joining the Tynecastle outfit.

A hearing has been set for Thursday 12 September.