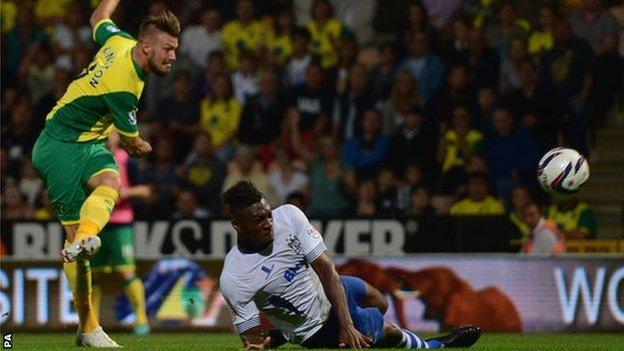 Johan Elmander scored twice on his first start for Norwich in a thrilling Capital One Cup second round victory over League Two side Bury.

Fellow Sweden international Martin Olsson fired the Canaries ahead before Anthony Pilkington drilled in a second.

Elmander struck twice either side of an Anton Forrester header for the Shakers.

William Edjenguele pulled a second back before goals from Norwich's Leroy Fer and Steven Whittaker and a 35-yard strike from Bury's Jessy Reindorf.

After picking up just one point from their opening two Premier League matches, Norwich boss Chris Hughton made eight changes from the side beaten at newly-promoted Hull on Saturday.

Olsson, who joined from Blackburn in the summer, was brought in for his first appearance and put Norwich in front when he turned smartly to score from the edge of the box.

Winger Pilkington added a second before half-time and the game looked to be over when former Bolton striker Elmander cracked in his first for the club seven minutes after the restart.

But the sides added six goals between them in a thrilling final 18 minutes.

Forrester headed in Bury's first after Marlon Jackson's effort came back off the crossbar.

Elmander bundled in his second from Robert Snodgrass's cross before Edjenguele pulled another back for Bury.

Fer and Whittaker notched for Norwich late on before Reindorf smashed in a spectacular strike to round off the evening in style.

"After Saturday we made a decision that we wanted to go strong.

"What there are is lads who need games, three out of my back four haven't play regularly - Martin Olsson, Seb (Bassong) and Ryan Bennett - and they need the games and I thought they came through it very well.

"It was good for those who got 90 minutes under their belt, they needed it.

"If you look at the side we put out it was strong enough and had a fair amount of intent in that team."

"The Norwich crowd gave everyone of our players a standing ovation at the end.

"It was a game and half and their goalkeeper has got man of the match. He's pulled off save after save and we've hit the bar and the post and had two strong penalty shouts.

"I'm proud of the players. It was a good performance.

"How we played was key, some of the Norwich players said when they came off the pitch that we play some good stuff so I'm pleased with the players overall."