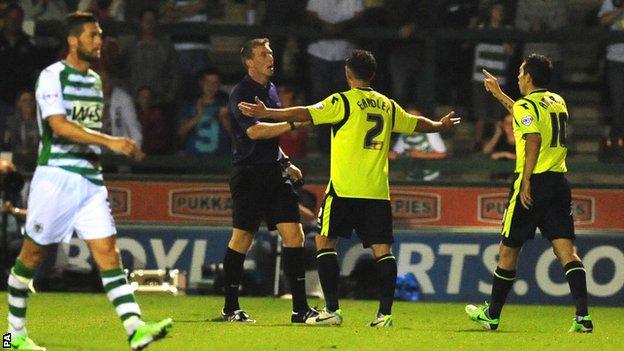 Yeovil let Birmingham walk in a goal unopposed to make amends for their own "unsporting" equaliser - but were still knocked out of the Capital One Cup on penalties.

In bizarre scenes at Huish Park, Yeovil's Byron Webster made it 2-2 and sent the tie into extra-time when he controversially chipped into an empty net after Blues goalkeeper Colin Doyle had kicked the ball out following an injury to Dan Burn.

Lee Clark's team expected it to be returned to them yet, with the defender still down, Webster quickly received the ball from the throw-in and chipped Doyle, who was still off his line, prompting a skirmish between both sets of players.

Luke Ayling made it 3-2 to Yeovil in extra time with a left-footed drive.

But, straight from the restart, the home crowd were left stunned when City's Lee Novak was allowed to score an unopposed equaliser after Glovers manager Gary Johnson decided Webster's goal had been "ungentlemanly."

That forced a penalty shoot-out and the 2011 winners eventually prevailed courtesy of Tom Adeyemi's penalty.

"I might be wrong but my parents made me grow up to be a good sportsman, win, lose or draw," said Birmingham manager Clark.

"I'm going to go down the right channels to complain; something has got to be done.

"It's always easy to give a goal back when you're leading. We were winning going into injury time."

Yeovil boss Gary Johnson said: "I apologised to Lee Clark at half time in extra time because, on reflection, it was ungentlemanly.

"However, we get a bit fed up of teams kicking it out for their own players here when we're trying to get a goal back.

Marc Overmars's goal for Arsenal in 1999 saw Sheffield United threaten to walk off the pitch in their meeting in 1999.

The Dutchman scored after Kanu passed to him when the Blades had kicked out the ball to allow Lee Morris to receive treatment.

"It's happened to us for the last three games. I had this gremlin in my head that said play on, but I didn't expect the series of events to follow.

"I apologise to the Birmingham fans, staff and players, but this kind of thing is happening too often at the minute."

Prior to the game's sparking point, Birmingham snatched a well-deserved early lead when Kyle Bartley headed in a Neal Eardley corner.

Ed Upson replied with a powerful 20-yard free-kick, before the visitors went back in front after Andrew Shinnie lashed home Chris Burke's cross just before the break.

Webster's goal - reminiscent of Marc Overmars's for Arsenal against Sheffield United in 1999 - came in injury time at the end of the second half after an injury to defender Burn, who spent last season on loan at the Glovers.

In 2004, Johnson - then in his first spell as Yeovil boss - was involved in another League Cup tie involving a "deliberate" goal.

Johnson's son Lee accidentally scored for the Glovers while attempting to play the ball back to Plymouth keeper Luke McCormick after an injury stoppage, as McCormick had moved off his line.

Johnson senior then instructed his team to stand still while Stevie Crawford ran through unchallenged to equalise for Argyle.

A similar incident had occurred during a reserve game between Millwall and Bournemouth in 2002.

Clark added: "This club has got great tradition in this competition and I want to carry that on.

"We want a home draw and one we're capable of winning as this can kickstart our season."