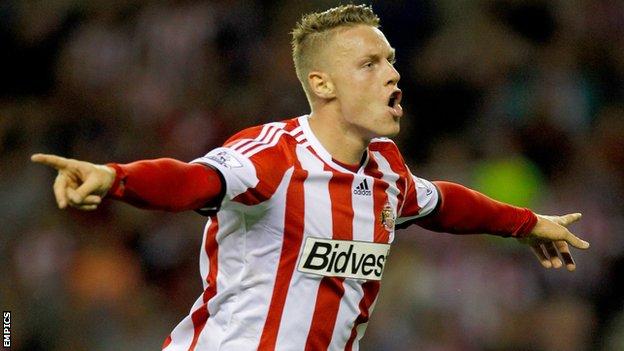 Sunderland scored four goals in the last 12 minutes to knock Milton Keynes Dons out of the Capital One Cup.

Patrick Bamford fired the League One side in front from 20 yards and Izale McLeod's deft chip doubled the lead.

Substitute Connor Wickham levelled after a neat passing move and then made it 3-2 to the Premier League hosts with a deflected strike, before Adam Johnson wrapped up the win from a tight angle.

The final outcome was cruel on MK Dons, who looked as though they would record one of the shocks of the second round for much of the tie.

But Karl Robinson's team suffered a League Cup exit at the hands of the Black Cats for the second year in succession, as Paolo Di Canio's men ended their winless start to the season.

Sunderland also knocked Milton Keynes Dons out of the Capital One Cup in 2012-13, winning a third-round tie 2-0 with second-half goals from Craig Gardner and James McClean.

Altidore hit a post for the hosts in the closing stages of the first half, while McLeod missed a golden opportunity to double the lead, shooting wide when clean through on goal.

But McLeod made no mistake when presented with a similar opportunity in the opening stages of the second period, lifting the ball over the advancing Mannone to establish a two-goal advantage.

Di Canio, who named record signing Steven Fletcher on the bench after five months out with an ankle injury, chose instead to turn to Wickham, Larsson and Greek youngster Charalampos Mavrias in an attempt to get back into the match.

Altidore's first goal in Sunderland colours, set up by Wickham, started the comeback on 78 minutes, before the England Under-21 striker converted Ondrej Celustka's cross to equalise.

Wickham's second, a long-range shot that deflected off Dons defender Ben Reeves past goalkeeper Ian McLoughlin, completed the turnaround, while Johnson's mazy run and finish from an acute angle sealed Sunderland's passage into round three.

Sunderland manager Paolo Di Canio: "It was very bad, but I know also it is easy to play badly in this game. Unfortunately, it happens even to the top clubs who play with the top players in this league.

"It's something that I have thought for many years - why do top teams in the cup in England have to go out easily against League One and League Two sides? I don't understand, but I understand [now].

"I was worried, and I was right, but I took something really good from the last 15 minutes - the ambition, the desire, the pride and the goals that we scored in style.

MK Dons manager Karl Robinson: "I have just gone in and had a bit of an argument with some of the players because I went in and said 'well done' and they are disappointed at not winning here tonight, so that in itself is a tremendous testament to them.

"I have got young kids - Dele Alli has just turned 17 and I think you will be writing an awful lot of lines about this young boy many, many times because he's as good as I've seen.

"You have all seen tonight that he's destined for going in one direction. He's got all the attributes. He's in there fuming that we have been beaten at 17 years of age."