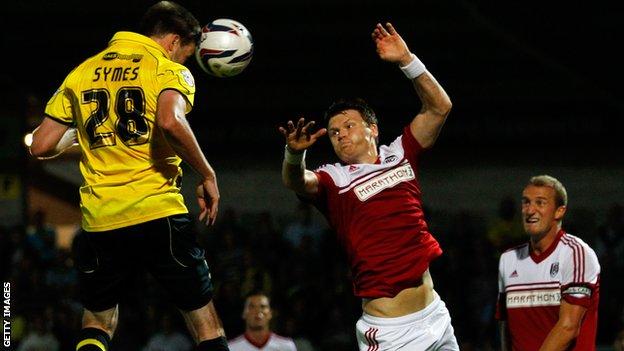 The Brewers were outclassed for 75 minutes and the near full-strength visitors led through Adel Taarabt's superb strike, but Jack Dyer's shot made it 1-1 with five minutes left.

Substitute Michael Symes headed home in extra time to put the hosts ahead only for Hugo Rodallega's fierce shot to force penalties and Riise netted the winner after Dyer had missed.

The incredible finale seemed highly unlikely as the Premier League side completely dominated the first three-quarters of the match.

Taarabt was the outstanding creative player long before his sweetly struck effort put Fulham ahead on 36 minutes.

It could have been a bad night for us. The crowd smelt blood but it turned out nice in the end.

The Moroccan midfielder showed his full range of tricks and had several shots on goal before a lengthy spell of possession ended with him beating Phil Edwards and finding the far corner of the net.

Burton, who are in the play-off spots and unbeaten after an impressive start to the season, struggled to win possession and, when they did were guilty of surrendering it far too easily.

The gulf in class looked too much for them before the interval although the giant figure of striker Rene Howe did pose problems. Howe tested keeper David Stockdale with a decent low strike and sent another shot just off target.

But apart from Howe's considerable physical threat and a few dangerous set-pieces, the west Londoners were largely untroubled and always in control.

Scott Parker was hugely impressive in the centre of the pitch and allowed the creative trio of Bryan Ruiz, Ashkan Dejagah and Taarabt plenty of time and space.

But a barnstorming final 15 minutes in which Burton suddenly found their belief, saw Dyer go close with a rasping effort before he smashed home a similar chance when Chris Hussey crossed from the left with five minutes left.

I thought we had some brilliant performances. To almost knock them out was incredible.

Brewers substitute Symes had the ball in the net in the final moments but that was wiped out for handball.

Fulham regained their composure in the extra period and started to create chances. Bent had a near-post effort saved and Sascha Riether should have scored from 12 yards but blasted the ball against the foot of the post.

Burton, who were playing their first home League Cup tie and first game against Fulham, responded again and Symes put the hosts ahead, leaping highest at the far post to head home.

But Fulham's Rodallega smashed home a 117th-minute leveller to force the penalty drama.

Dyer was the unlucky man to miss his spot-kick and Riise blasted home the winner in front of the relieved travelling support.

Burton boss Gary Rowett: "I thought we had some brilliant performances.

"To almost knock them out was incredible. I thought we were brilliant, absolutely brilliant.

"We've got a brilliant group of players here and over 90 minutes we are still technically unbeaten this season."

Fulham manager Martin Jol: "It could have been a bad night for us. The crowd smelt blood but it turned out nice in the end.

"But I am pleased with the resilience of my squad, they showed that they wanted to get through."