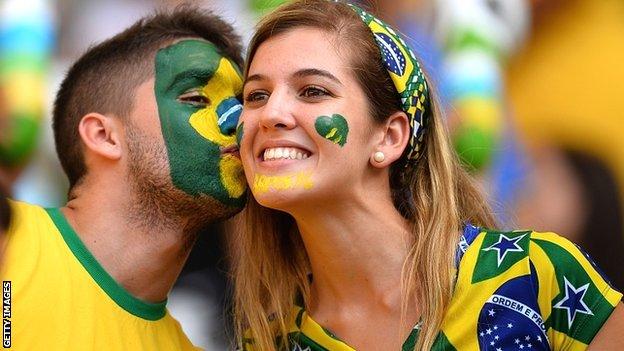 Tickets for the 2014 World Cup in Brazil went on sale on Tuesday, with fans able to apply on Fifa's website.

Fifa is expecting a similar demand to Germany 2006, when there were about seven applicants for every ticket of the 64-match tournament.

Around 3.3 million tickets will be available for the tournament.

Brazilian citizens over 60, local students and members of some social programs can purchase tickets for £15 ($23).

"It's always difficult to predict," said Fifa marketing director Thierry Weil. "But I truly believe that it will be more toward to what happened in Germany than in South Africa in 2010."

According to Fifa, the 2006 World Cup was attended by more than 3.3 million fans. Almost two million tickets were sold to the general public in South Africa, although the number of applications during the first ticketing phase was significantly lower.

All applications made before 10 October 2013 will enter a random selection draw if there are not enough tickets available to fulfil all requests.

The sales of the leftover tickets will begin on 5 November on a first-come, first-served basis. Another phase will begin on 8 December after the draw is made.

The tournament begins on 12 June, with Brazil playing the opener in Sao Paulo.

BBC World Service carried out a study, called the Price of Football - World Cup 2014, which looked at the ticket prices and the cost of travelling to Brazil. It found that English fans face hotel costs of between £46 and £797 a night, while packages range from £2,999 to £14,999.

The 2013 BBC Price of Football study, looking at the cost of following 166 clubs across the 10 divisions of English and Scottish football, will be published on Thursday, 12 September.