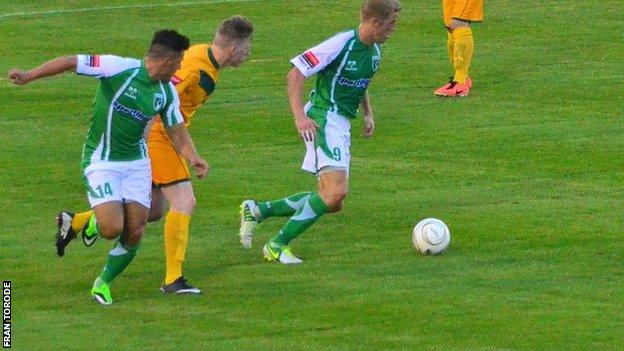 Goals from Nigel Hutton and Mark McGrath got Guernsey back to winning ways after two successive defeats.

"I was really pleased considering the youthfulness of the squad we had. It proves that these guys can play at this level," he told BBC Guernsey.

"It was very rewarding for them to get a result."

Youngsters Tom De La Mare, Kyle Smith and Tom Martin all came in to the squad, with captain Sam Cochrane, Chris Tardif, Scott Bougourd and Glyn Dyer among those on the sidelines.

"I've known about these youngsters and it's about integrating them at the right time - you have to walk before you can run so it might be they only play a few games this season," said Vance.

"But every game they play will be a bonus for them and in two or three years' time they'll be better for it and so will Guernsey FC."

The Green Lions, playing at their highest level since being formed in 2011, had been brought back down to earth by consecutive home defeats so the win over the Casuals was all the more welcome ahead of Saturday's game against Crawley Down Gatwick.

"Obviously after the last couple of games, it's fantastic to get three points going into Saturday," Vance added.

"That's going to be hugely important and very difficult against a side that's top of the table and flying high - they've got a lot of players on a lot of money so it will be a massive test for us."