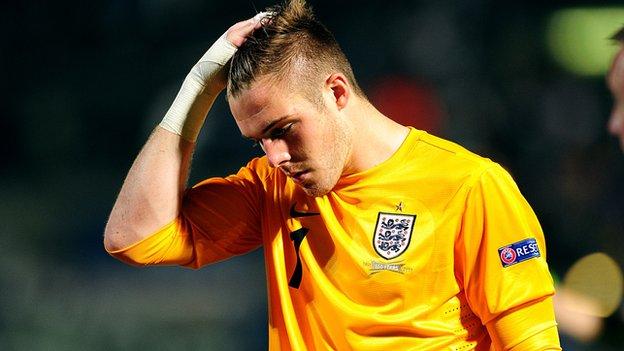 Stoke City keeper Jack Butland feels he may need a loan move if he is to make England's World Cup squad in Brazil.

The England Under-21 goalkeeper, who has one full cap and was a late call-up for the senior squad at Euro 2012, did not make the Stoke squad that lost 1-0 at Liverpool on Saturday.

"I need to play games if I'm to be involved in the England squad next summer," Butland told BBC Stoke.

"We'll have to see what happens in the last two weeks of the transfer window."

Butland joined Stoke from Birmingham City in January for a fee rising to £3.5m, but was immediately loaned back to the Championship club for the rest of the season.

But whatever long-term plans Tony Pulis may have had for him were sidetracked by his sudden summer departure as Stoke boss.

"I'm disappointed," added Bristol-born Butland, 20. "I don't like being sat on the bench.

"But Asmir deserves to stay in the team. He's a fantastic goalkeeper and I always knew it was going to be hard to get past him.

"I've learnt a lot from working with him and Thomas. But, having had my first taste of the Premier League environment, it just makes me want it more."

With Begovic seemingly established as first choice, Butland accepts he may have to move out on loan to increase his chances of adding to his one senior international cap, won in the 2-1 friendly victory over Italy in Berne last August.

"That could be the case," admitted Butland. "We'll have to see what happens in terms of other clubs who might need goalkeepers."