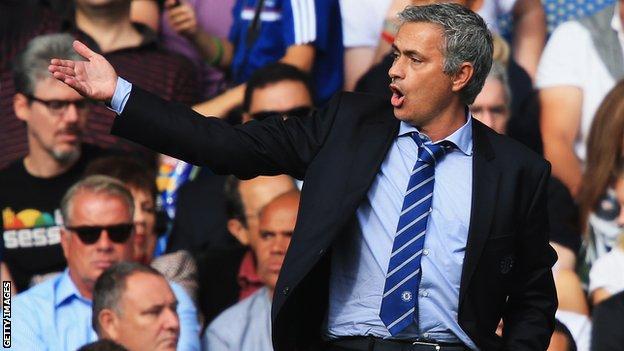 Chelsea manager Jose Mourinho says the club are likely to make a third bid for Wayne Rooney - but not until after Monday's clash with Manchester United.

United have rejected two bids, the latest £25m plus add-ons, from Chelsea for the 27-year-old England striker.

"I don't want Chelsea to do it before we go there," Mourinho said after their 2-1 defeat of Aston Villa.

"I think this period, by the ethical point of view, is a period where we're going to be quiet."

Rooney, who came on as a substitute in Manchester United's 4-1 win over Swansea on Saturday, is understood to be intent on leaving, even though United manager Moyes insists the striker is not for sale.

Mourinho said in July that Rooney is his only transfer target, but then claimed before his side's win over Aston Villa that the club have back-up options if they fail to sign the former Everton player.

"We have plans B and C. Don't ask me names. It's difficult to speak about players from other clubs," he said.

"We have the conditions to try to improve our team by bringing in one more player and we are going to try that till the end."

Mourinho admits the Blues are likely to continue their pursuit of Rooney, although the Portuguese accepts United are under no obligation to sell the player, just as Chelsea rebuffed Barcelona's attempts to sign David Luiz.

"You try, because nobody forbids you to try," Mourinho said.

"Of course, the player's owners can do exactly what we did in relation to David Luiz and Barcelona."