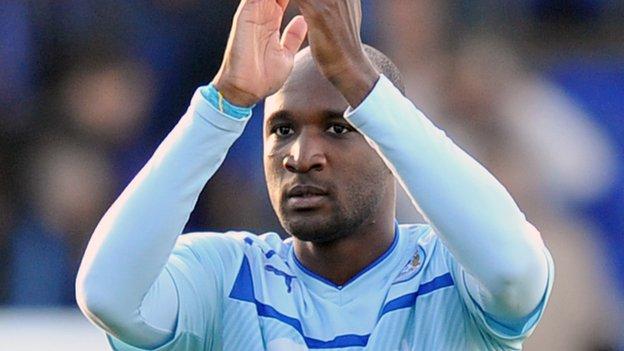 Coventry City centre-back William Edjenguele has had his contract with the cash-strapped League One club terminated by mutual consent.

The 26-year-old Frenchman proved a big favourite at the Ricoh Arena last term, having been signed on a three-year deal by then Sky Blues boss Andy Thorn after a successful pre-season trial.

But he was one of eight players made available for offers in July.

Three have found new clubs, but four more are still to be offloaded.

Long-serving forward Gary McSheffrey, Steven Jennings, Kevin Malaga and Sean Jeffers are still tied to the club, but not part of the first team squad.

But midfielder David Bell was signed by Notts County, striker Cody McDonald returned to Gillingham - where he spent part of last season on loan - and keeper Chris Dunn was picked up by Championship side Yeovil Town at the weekend.

After his contract had expired at Greek side Panetolikos last summer, Edjenguele was a free agent when he joined Coventry in July 2012, going on to make 40 appearances for the club.

After being docked 10 points for the second time this year, Coventry remain bottom of League One.

But two wins in successive matches have lifted them to within four points of 23rd-placed Carlisle United, ahead of Sunday's 'home' date with Preston at Sixfields.