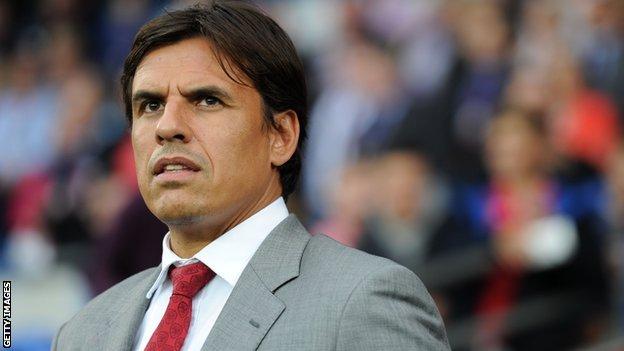 Wales manager Chris Coleman was unable to fly to Macedonia with the squad ahead of Friday's World Cup qualifier after losing his passport.

Coleman missed the team flight from Cardiff on Thursday and was not present for a pre-match news conference or final training at the Philip II Arena.

He travelled to Skopje from Heathrow after obtaining a new passport.

The 43-year-old had earlier said he was close to signing a new contract to stay in charge of Wales beyond summer 2014.

The ex-Fulham boss, whose contract is due to expire next year, has held talks with the Football Association of Wales (FAW) over an extension and said he was impressed with the way talks had been conducted.

"There won't be a problem. I should really be signing a new contract very, very soon," Coleman said.

Assistant manager Kit Symons stepped in to face the media and take training in Skopje in place of Coleman, but insisted the incident would not affect Wales' performance in their Group A encounter.

Symons said: "There were a couple of passport issues which needed to be resolved, and they have been.

"He will not make training but all the tactical stuff has been done during the week and it's just about the boys stretching their legs tonight, so it will not be a disruption.

"I am sure he will bat it off and get on with it and not be embarrassed."

Captain Ashley Williams appeared amused by the incident, joking: "I've got my passport!"

The Swansea defender added: "Most people did not realise anything was wrong until we were on the plane."

Coleman's new contract should be completed after Wales' next two World Cup qualifiers, against Macedonia on Friday and Serbia on Tuesday.

He said: "We have had good talks with Jonathan Ford, our chief executive, and the FAW. They have been very good and very positive.

"It's just that we need to get this block of games out of the way and concentrate on this. Everything is agreed.

"I'll never do a bigger job than the one I'm doing now. It will always mean the most to me and is the one I always wanted to do."

Coleman, who has also managed Real Sociedad and Coventry City, was appointed Wales boss in January 2012 on a two-and-a-half-year contract following the death of Gary Speed.

Wales lost their first four games under Coleman but have won three of their last six matches.