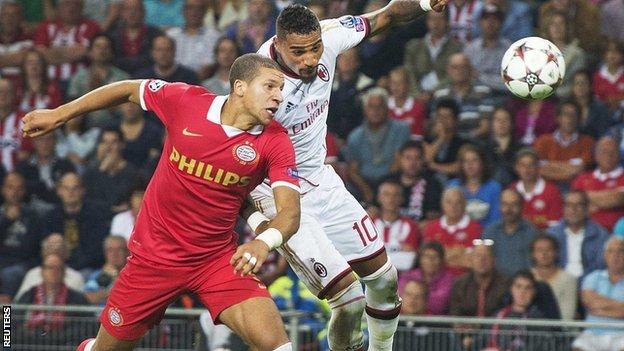 AC Milan hold the upper hand in their Champions League play-off tie against PSV Eindhoven after a 1-1 first-leg draw in the Netherlands.

Stephan El Shaarawy's header gave Milan the lead and an away goal, before Tim Matavz pounced on an error by Milan goalkeeper Christian Abbiati to level.

Russian side Zenit moved to the brink of the group stage with a 4-1 win away to Portuguese side Pacos Ferreira.

Roman Shirokov scored a hat-trick to down the Champions League debutants, who finished third in the Primeira Liga last season.

Lyon are facing a struggle to reach the group stage after a 2-0 home loss to Real Sociedad.

Two spectacular goals - the first an acrobatic effort from Antoine Griezmann, the second a long-range volley by Haris Seferovic - defeated the French side, who also had Milan Bisevac sent off for two bookable offences.

Plzen, meanwhile, earned a 3-1 win at home to Maribor.

Marian Cisovsky and Vladimir Darida gave the hosts the advantage before Ales Mejac's long-range strike pulled one back for the Slovenian side.