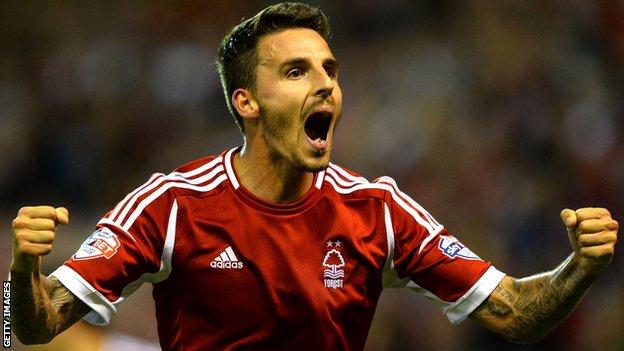 Jamaal Lascelles headed Nottingham Forest into the Capital One Cup third round with an extra-time winner against fellow Championship side Millwall.

Matt Derbyshire found space in the box to put the home side ahead on the hour, heading home Djamel Abdoun's cross.

Substitute Ishmael Miller missed two chances to double Forest's lead before Liam Feeney equalised with a deflected strike from the edge of the box.

But Lascelles headed in when Millwall again failed to deal with a corner.

Forest boss Billy Davies changed his entire starting line-up from the one that held on to top spot in the Championship with a draw at Watford at the weekend.

Opposite number Steve Lomas is still searching for his first win since taking over at the Den in the summer.

His side had slightly the better of a disappointing first half, Scott McDonald coming closest to an opener with a shot from the edge of the box that was acrobatically tipped away by keeper Dorus De Vries.

But the home side were ahead when a neat corner routine saw Algerian winger Abdoun pick out Derbyshire to head in from six yards.

Millwall keeper Stephen Bywater made two fine saves to keep out Miller, spreading himself well as the striker broke through on goal.

And the Lions were level in the 86th minute when Feeney drilled in a low shot that appeared to clip Andy Keogh on its way into the net.

Lascelles headed Forest back in front four minutes into extra time when Greg Halford nodded Jamie Paterson's corner back across goal for the academy product to score.

Forest travel to another Championship side, Burnley, in the third round.

Millwall manager Steve Lomas told BBC London 94.9: "We had at least eight good chances, and we are talking about two set-plays again being the difference.

"I've said to the lads that you can play all the best football in the world between the two boxes, but they are the most important things - defend set-plays and take your chances. Until we start doing that, it will be the same scenario time and time again.

"Again we come away with nothing when I thought we would probably be in the next round.

"We wanted to get our first win on the board and kick on from a very positive draw at Sheffield Wednesday, and I thought we did more than enough to warrant something out of this game."