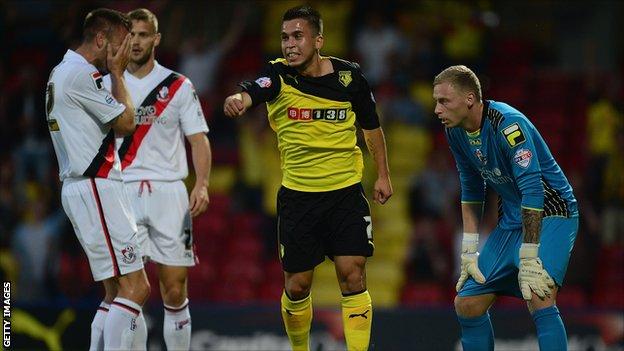 Watford sealed their place in the third round of the Capital One Cup with a hard-earned victory over Bournemouth.

Elliott Ward diverted the ball into his own net to give Watford the lead and Jonathan Bond tipped Cherries striker Brett Pitman's free kick onto the post.

But Watford sealed victory with Cristian Battocchio chipping Ryan Allsop to finish off a fine break.

Capital One Cup third round draw

Watford manager Gianfranco Zola, who made 10 changes, saw his side take the lead in unusual fashion after 15 minutes.

As Fernando Forestieri tried to pick out Javier Acuna from the right, Ward intercepted but his attempt to chest the ball back to Allsop looped over the helpless goalkeeper into the net.

The lead was almost doubled when an audacious cross-field pass from Forestieri set Watford away on the counter-attack and Daniel Pudil nodded the ball on to Davide Faraoni, whose low cross from the right was not far away from the sliding Acuna.

Bournemouth almost levelled with their first effort of note when Pitman's low curling effort from a free-kick was touched onto the post by keeper Bond.

Pitman also fired over after a mistake from Faraoni before Acuna went closer at the other end with a deflected 25-yard strike that flew narrowly wide of Allsop's right-hand post.

The Cherries should have equalised shortly before half-time when Marc Pugh's cross from the left picked out the unmarked Surman, but he headed badly wide.

Watford needed Bond to come to their rescue again when he raced from his line to deny MacDonald, who was put through on goal.

Bond also had to hold onto a well-stuck shot from Pugh as the visitors continued to threaten, only to be undone on the counter-attack by a superb second Hornets goal.

Acuna attacked the Cherries defence at pace before slipping the ball to Battocchio, who did not break stride as he produced a delightful chip from the edge of the area that beat a bemused Allsop via the underside off his crossbar.

Ward then met a Cherries corner with a powerful close-range header, only for Bond to pull off the save off the night to divert the ball away.

Acuna was not far away from adding a third with a curling shot as Watford saw out the remainder of the contest in relative comfort.