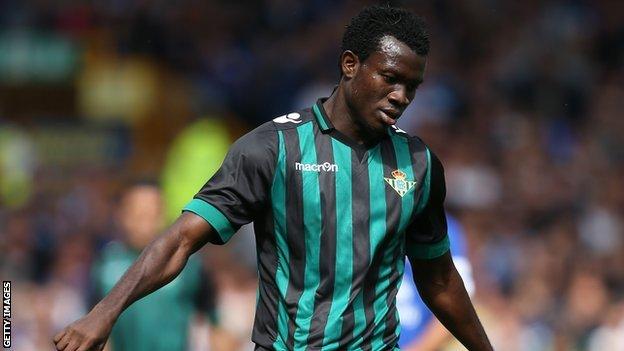 Nigeria coach Stephen Keshi has named the 18 overseas players that he wants to use for next month's World Cup qualifier against Malawi in Calabar.

The 18 will be joined by five locally-based players for the game that will decide who qualifiers for the final round of 2014 play-offs.

Spain-based Nosa Igiebor (pictured) and Fenerbahce striker Emmanuel Emenike are available for the first time since the Africa Cup of Nations.

"I am delighted to be able to call upon some of our most important players for the first time since the Nations Cup," Keshi told BBC Sport.

"It is important we hit the ground running in a game that will hopefully move us closer to the World Cup in Brazil.

"The decision to invite players who have been part of the rebuilding process is to make life easier against a dangerous opponent."

Uche Nwofor, whose scored both goals for the Super Eagles as they beat South Africa 2-0 in a friendly last week, retains his place in the team.

Lokomotiv Moscow striker Obinna Nsofor, who played his first game under Keshi against South Africa, also did enough in the win over Bafana Bafana to be among the 18.

African champions Nigeria only need a draw in the qualifier against Malawi to reach the play-offs that will decide Africa's five qualifiers for next year's World Cup in Brazil.

The Flames must win the match if they are to top Group F and progress.

The five who will be added to the group will be chosen from a 24-man squad of locally-based players that Keshi has picked for a friendly against Burkina Faso in Kaduna three days after the Malawi tie.

"The Burkina Faso match will be good preparation for the local lads ahead of their CHAN tournament in South Africa next year," Keshi said.