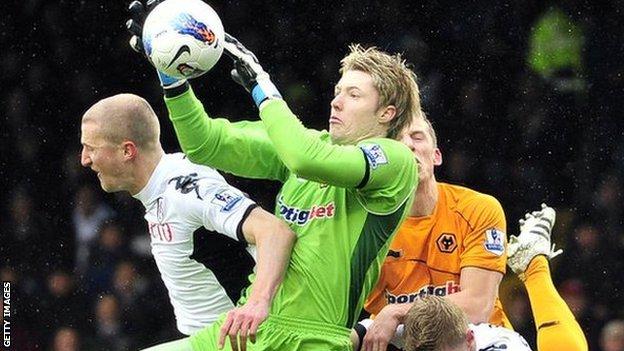 Wayne Hennessey's month-long loan from Wolves to Yeovil Town has been finalised after the Wales goalkeeper overcame a recent injury worry.

The 26-year-old has not played a senior game since April 2012 because of cruciate ligament problems.

He was set to move to Yeovil last week, but the deal was put on hold after he tweaked his hamstring on while on international duty.

After undergoing tests, Hennessey has now been cleared to join the Glovers.

The Championship club had brought in Sam Johnstone on loan from Manchester United to fill the gap left by Hennessey, but he has now returned to his parent club with a finger injury, sustained in Saturday's 2-0 defeat by Burnley.

Yeovil were forced to look for another keeper after first-choice Marek Stech broke his hand during the first home game of the season, a 1-0 defeat by Birmingham.

Goalkeeping coach Gareth Stewart, 33, is used as the Glovers' regular back-up to Stech and played for 82 minutes against the Blues.