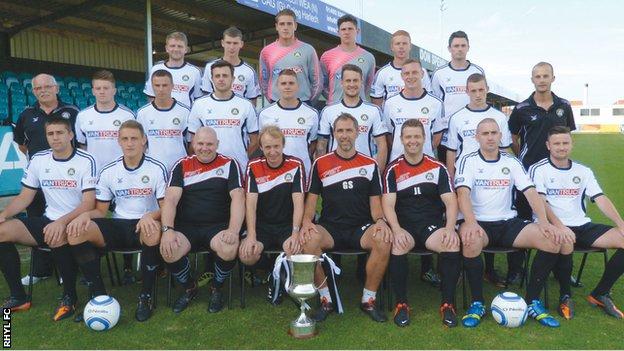 Rhyl FC managing director Mike Jones has every reason to smile ahead of the new Welsh Premier League season.

Saturday's home fixture against Aberystwyth Town will be the two-time champions' first game in the league for three years.

Financial problems had led to demotion from Welsh football's top flight at the end of the 2009-10 season and it also meant they narrowly missed out on more European competition.

But after that difficult period, rebuilding and winning the second-tier Cymru Alliance last season, Jones is not only confident Rhyl can re-establish themselves at the top again, but also challenge once more for European football.

"We've had a very good pre-season, we've strengthened the squad and have proven we can beat Welsh Premier teams in the last couple of years," Jones said.

"Hopefully we will surprise quite a few people... the aim for the club is to finish in the top six. It's got to be a gradual building process [but] we want to get back in Europe.

"I've loved my European trips. They're the best days of your life when go with your club as a supporter and I've never had that feeling to go as a director.

"I do believe that in the future we will be back in Europe as we were for those several seasons, three or four years ago. We want to be back where we belong."

At the start of the 2009-10 season Rhyl were Welsh champions and faced Partizan Belgrade in the Uefa Champions League.

But although the Lilywhites finished sixth that season, which would have secured a place in the revamped 12-team Welsh Premier League, financial problems scuppered their hopes.

Their application for a domestic licence from the Football Association of Wales, needed to play in the top-flight, was rejected.

"It was a surprise and a disappointment to a lot of people," recalled Jones.

"It was a blow, and the fans were gutted when the news broke and we had just narrowly missed out on European football by three points.

"But on the day the news broke I said it was a blessing in disguise on the knowledge and facts I knew at the time. Lessons have been learnt

"We made changes, which had to be done.

"We've had to re-evaluate the situation, restructure, get the finances right and build it back up and we're going from strength to strength.

"I think it's perfect timing for us to back in the Welsh Premier and we're going on the back of a fantastic season of being unbeaten in the league.

"We went out of the back door and we're coming straight through the front door."

"Whoever is going to finish above The New Saints will finish as champions I think. They were head and shoulders above the other teams last season.

"Airbus did well last season in finishing second and Andy Preece has made some shrewd signings in the summer. They will be the ones to push TNS this season.

"Port Talbot have strengthened with Rhys Griffiths and Gethin Jones and they'll be strong and hard to beat.

"It's nice to see Rhyl back after a three-year gap and everyone is looking forward to the local derby on Bank Holiday Monday between Bangor and Rhyl. "

The Lilywhites secured promotion to the top-flight having already been awarded the domestic licence which had been denied three years previously.

Following Rhyl's demotion in 2010, loyal supporter Jones accepted an invitation to join the committee as the club faced up to life outside the top-flight.

Other supporters have also become involved in the running of the club, which Jones says has been crucial in Rhyl regrouping and regaining their top-flight status.

"Without the fans there wouldn't be Rhyl Football Club," said Jones, who was the club's general manager before being appointed managing director in June.

"It's a fans club, run by fans like myself, and very similar to FC United of Manchester and Chester. I think it's the way football is going.

"We do it for the fans, the town and for the community."