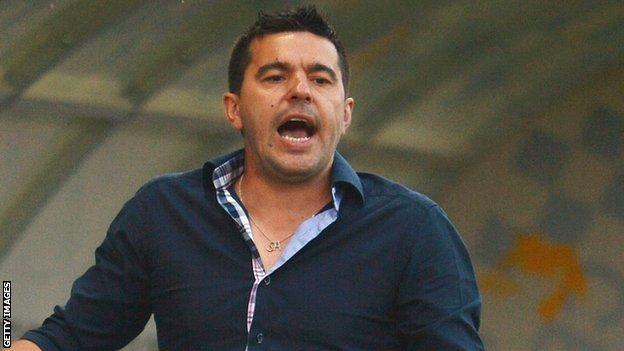 Swansea's Michael Laudrup admits that it will be a strange experience to pit his managerial wits against Petrolul Ploiesti boss Cosmin Contra.

Contra played at Spanish side Getafe under Laudrup and the pair cross swords in Thursday's Europa League play-off first leg at the Liberty Stadium.

Cosmin Contra played and had two great games against Bayern Munich in the quarter-finals, he scored in both of them but unfortunately it wasn't enough

Laudrup, 49, says the 37-year-old Contra is his first former player he will face as a manager.

"It's a little strange to play against a team coached by Cosmin," he said.

"Before I've tried to play against teams where I've been playing with the manager or against him.

"But suddenly we're playing a team where the manager of the opponent is one who has been playing for me, under me.

"That means I must be getting very, very old and that's not very nice!"

Contra, an attacking full-back or midfielder, was a key part of the side that reached the 2007-08 Uefa Cup quarter-finals, before losing to Bayern Munich on away goals after the sides were locked 4-4 on aggregate.

"A part of that of course is we have big memories, if we're talking European football - that was our year where we worked together in Getafe where we reached very far in the competition," Laudrup added.

"I remember that Cosmin played and had two great games against Bayern Munich in the quarter-finals, he scored in both of them but unfortunately it wasn't enough."

Victory over the Romanians would earn Swansea a place in the Europa League group stages.

Swansea earned their place in the play-off round after completing a 4-0 aggregate win over Malmo, while Ploesti beat Vitesse Arnhem in the third qualifying round.