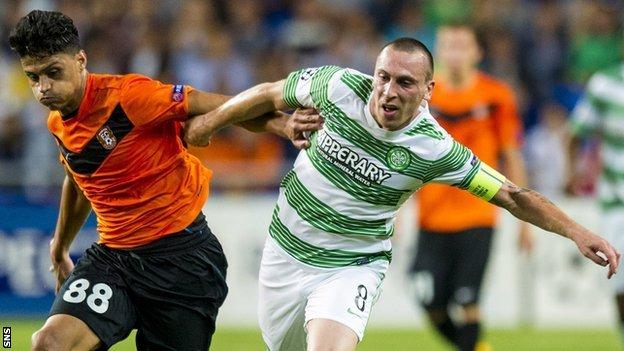 Celtic host the Kazakh side in next Wednesday's return leg, with a place in the group stage of the competition the prize for the eventual winner.

"When the final whistle went I was still pretty confident of Celtic going through."

If you're going to go far in Europe, you need someone to bang in the goals

Shakhter have not previously featured in European group stage competition and Wilson feels their inexperience may work in Celtic's favour.

"Celtic Park is really an intimidating place to go for any team and a team coming from Kazakhstan who haven't played much European football," said the Dundee United defender.

"They are going to be intimidated and it's important that Celtic get the best possible start, I think that's key to the game. If Celtic score early on, you really would fancy them."

Celtic were unsuccessful in their attempts to sign Schalke's Teemu Pukki in the days before Wednesday's defeat, with manager Neil Lennon keen to sign a new forward following Gary Hooper's move to Norwich City last month.

And Wilson added: "I do think Celtic need a striker.

"Gary Hooper's a class act, not to say Anthony Stokes isn't but Gary Hooper was the main man and if you're going to go far in Europe, you need someone to bang in the goals.

"I think the one thing Celtic fans can have confidence in is that Neil, the coaching team and the scouting team have picked well over the years.

"If they're going to pick someone at this late stage of the transfer window, it's going to be the right guy. Maybe that's what they're doing behind the scenes. Maybe they're just waiting for the right time or the right bid to go in for one of these guys."