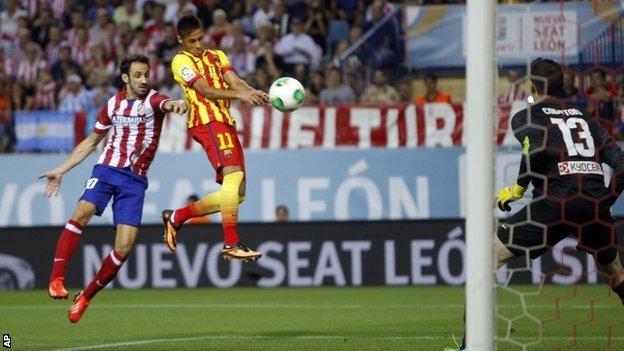 Brazilian Neymar scored his first competitive goal for Barcelona as they drew 1-1 with Atletico Madrid in the first leg of the Spanish Super Cup.

Atletico led after a stunning move was expertly volleyed home by ex-Barcelona man David Villa, who moved to the Vicente Calderon during the summer.

And fellow substitute Neymar rose highest to power in an away goal.

Barcelona coasted to the La Liga title by 15 points last season, and have new manager Gerardo 'Tata' Martino at the helm. The signs were positive following the first game of the season when they trounced Levante 7-0 at the Nou Camp.

But they were given a much sterner test in this encounter, as both Neymar and Fabregas started the match on the bench.

Martino's men showed more potency in the second period and were rewarded for their pressure as South American Neymar headed in from Dani Alves's cross, to salvage a draw for Barcelona.

The sides play the second leg at the Nou Camp on Wednesday, 28 August.