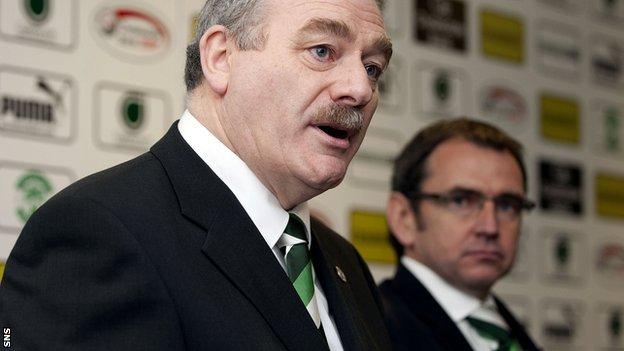 Hibernian chairman Rod Petrie has given his backing to manager Pat Fenlon at a meeting of supporters.

Fenlon is under pressure after a 9-0 aggregate defeat by Malmo in the Europa League qualifiers and one point out of nine in the Scottish Premiership.

Hibs said on their website the meeting with fans was "challenging, but held in a spirit of respect and courtesy".

And the chairman was reported to have said Fenlon would be given "every opportunity" to improve performances.

However, they were well beaten both times and Hibs have yet to finish in the top half of the league table under Fenlon.

"Hibernian supporters are passionate about their team and their club," read the statement on the website.

"They want only the best for Hibernian. That passion is shared by the board and everyone at the club.

"Supporters were understandably critical of performances and results, particularly against Malmo at home and at Tynecastle in the Edinburgh Derby [against Hearts].

"The second leg [7-0 defeat] against Malmo in the Europa League was a nightmare. No-one took any pleasure from the match and everyone shared the embarrassment of our worst ever result in Europe.

"The chairman acknowledged the depth of feeling as something he shared. The club could only apologise once more.

"The group agreed the manager has assembled a talented group of players this season.

"The chairman said the board and the club are keen to give the players and the manager every opportunity to deliver improved performances and through that, win matches. He told the meeting that we need to get better."