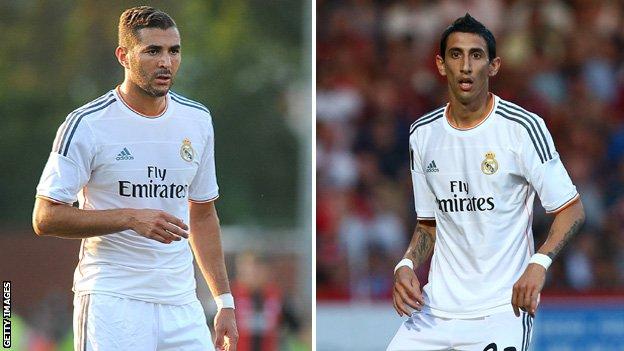 The Gunners are prepared to pay £40m for 25-year-old France striker Benzema after missing out on Gonzalo Higuain and Liverpool's Luis Suarez.

Arsenal boss Arsene Wenger also wants Argentina left-winger Di Maria, 25, and is understood to be chasing a keeper and a defender as well.

The Londoners won 3-0 at Fenerbahce in the Champions League on Wednesday.

It means they are in control of the qualifying play-off tie heading into the second leg at Emirates Stadium on 27 August and should they reach the Champions League group stage for a 16th consecutive season, it could help attract transfer targets to the club.

Wenger is a long-term admirer of Benzema, who joined Real from Lyon for an initial £30m in 2009, while Di Maria arrived at the Bernabeu from Benfica a year later.

Arsenal's only summer signing to date is the 20-year-old French striker Yaya Sanogo on a free transfer from Auxerre, but it is thought they could spend close to £100m by the close of the transfer window at 23:00 BST on 2 September.

Speaking after his side's win at Fenerbahce in their Champions League qualifying play-off first leg, Wenger admitted the pursuit of Suarez was over after Liverpool rejected two bids for their Uruguay forward and insisted he was not for sale.

"Absolutely no chance of that," Wenger said about the chances of Suarez arriving at Emirates Stadium.

The Gunners have also had a £10m offer for Newcastle midfielder Yohan Cabaye turned down, but Wenger suggested the final 12 days of the transfer window would be busy.

Arsenal lost at home to Aston Villa on the opening day of the Premier League season and have suffered injuries to Mikel Arteta, Alex Oxlade-Chamberlain and Laurent Koscielny, while Abou Diaby remains sidelined and fellow midfielder Jack Wilshere is still returning to full match fitness.

"Quality wise we do not need, but numbers wise we are short," Wenger continued.

"We lost Arteta and Diaby. We are without three international midfielders. We will try and bring one in but we are working on that. What you have to understand is that there is still a long way to go.

"The transfer market really starts now, a lot of activity will happen between now and 2 September. We have 12 days. A lot will happen. It starts now."