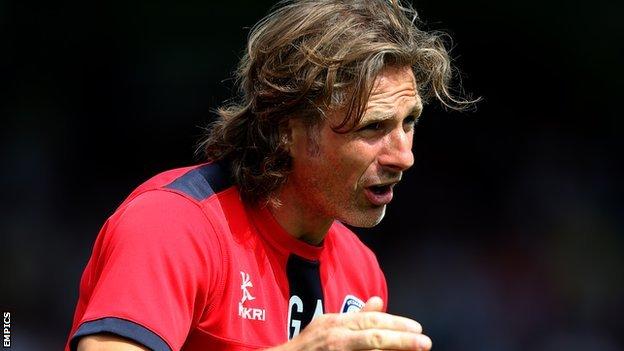 Wycombe boss Gareth Ainsworth expects an improvement from his team in Saturday's derby against Oxford after last weekend's defeat by Mansfield.

, their second defeat of the season, and he is looking for them to bounce back quickly.

High Wycombe and Oxford are separated by 30 miles of the M40.

Their derby is a burgeoning one, having rarely played each other until 1994.

Since then, they have met 18 times, with Wycombe winning eight games to Oxford's four.

"If there's any game they'll want to get the performance back, it's in the local derby against Oxford."

Wycombe started the season with a victory over Morecambe, but have since suffered back-to-back losses, with the reverse against the Stags proving particularly frustrating to Ainsworth.

"Too many of us had an off day," he said. "I'll take the blame as much as anyone, I'm the manager and it's part of my job to make sure we don't have those performances week in week out.

"If it consistently happens then there's a problem. I'll be looking this Saturday to make sure there's not a repeat of Saturday's performance.

"It will be a cauldron and we'll be going in as underdogs as Oxford have started the season so well.

"We've got everything to spoil and I'm looking forward to it."