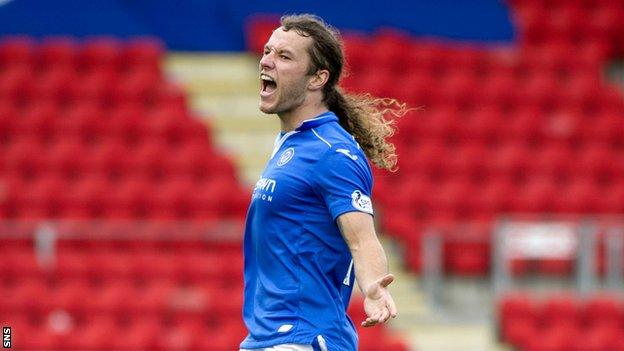 Stevie May will be offered an extended contract by St Johnstone and sees no reason to leave McDiarmid Park despite interest from Peterborough United.

Posh failed with two transfer bids for the 20-year-old striker.

But the told BBC Scotland that he is settled now that he is getting regular first-team football with the Scottish Premiership club.

And St Johnstone manager Tommy Wright has confirmed that May will be offered a new, improved contract.

after two seasons on loan, first to Alloa Athletic in Division Three then Hamilton Academical in Division One.

But he has scored three goals in seven appearances this season and made his Scotland Under-21 debut as a substitute in a 6-0 defeat by their English counterparts this month.

Stevie doesn't want to go to Peterborough. He doesn't think it is the right club

May and his representatives will sit down with the Perth club in the next few days to discuss a fresh contract.

"It is always good to get recognition," said May. "The manager told me yesterday that he was going to speak to the chairman about offering me a new deal.

"It is still early in the season, but I think I've done well to get into the team and it is up to me to stay there.

"At the start of the season, I didn't know if I was going to get my chance, but I'm in the team at the moment and what more can you want as a footballer.

"I've loving it at the moment. The last two seasons, I went on loan, but the long-term goal was always to come back here and play first-team football."

The news comes the day after about the League One outfit's bids for their player.

Wright says he is disappointed with MacAnthony's comments on Twitter.

"We try to do things right," he said. "We certainly don't use social media to inform another club we are not wanting their player.

"We've conducted ourselves in the right manner. We've done nothing wrong other than we haven't agreed with him on how any deal was meant to be structured."

St Johnstone demanded the money from any transfer fee up front, while Peterborough had wanted to structure their payments for May over a longer period of time.

"As our chairman has said, we don't do interest-free loans," added Wright.

"Stevie doesn't want to go to Peterborough. He doesn't think it is the right club.

"He wants to stay with us and his reasons are that he feels he will develop this year and, if he does really well, he might get a bigger club.

"Indeed, the chairman is going to sit down with his advisers and will offer him a new deal."