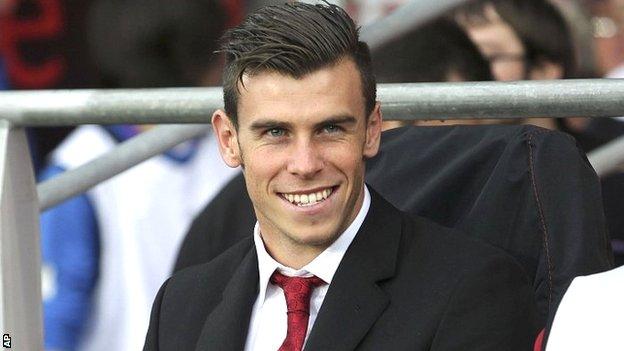 Tottenham and Real Madrid are in advanced talks over a deal to take winger Gareth Bale to the Bernabeu.

The transfer has yet to be agreed, but it could happen in the coming days and is set to eclipse the £80m world record fee Real paid Manchester United for Cristiano Ronaldo in 2009.

Wales international Bale, 24, is determined to join the Spanish club.

Biggest price tag? I loved it

"When I was the world's most expensive player, I loved it. I joined Newcastle for £15m from Blackburn in 1996. I thought it was a crazy amount of money, as it is now with Gareth Bale, but you are worth it if someone is prepared to pay that for you.

He did not travel for Thursday's Europa League tie with Dinamo Tbilisi in Georgia because of a foot problem.

It is an injury that kept Bale out of most of Tottenham's pre-season programme and their at Crystal Palace.

"On Gareth I am not able to comment on anything, that has been my tone since the start of the season and I will not come out of it," said boss Andre Villas-Boas after his team's 5-0 win in Georgia.

Any deal will not be announced before Real's friendly with Qatar side Al Sadd on Thursday. The match will mark the return of Real legend and leading scorer Raul, who now plays for Al Sadd.

The number 11 shirt, which Bale wears at White Hart Lane, has been left vacant at Real Madrid in the expectation their new record signing will take it on his arrival.

And there were reports on Thursday that the Spanish club were selling a Bale replica shirt, although shortly after screen grabs appeared on the internet the site was taken down for maintenance.

To help compensate for his possible departure, Spurs have twice broken their previous transfer record this summer, recruiting from Corinthians for about £17m and from Valencia for £26m.

The additional purchases of and have taken their total outlay to about £60m, while Anzhi Makhachkala attacker is in talks over a £30m move and Roma playmaker Erik Lamela is also rumoured to be part of Spurs' plans.

Bale joined Tottenham for £10m from Southampton in 2007 and scored 26 goals for the north London side last season.

Bale's camp that he wanted to speak to Real.

Real coach that they were "in talks to find a solution" to the transfer angered his Tottenham counterpart Villas-Boas.

But it looks increasingly likely that Bale will become Real's fifth summer signing.

Real Sociedad midfielder Asier Illarramendi and Malaga playmaker Isco have arrived for reported fees of £34m and £23m respectively while Dani Carvajal has signed from Bayer Leverkusen and Casemiro has been given a permanent deal after a loan spell from Sao Paulo.