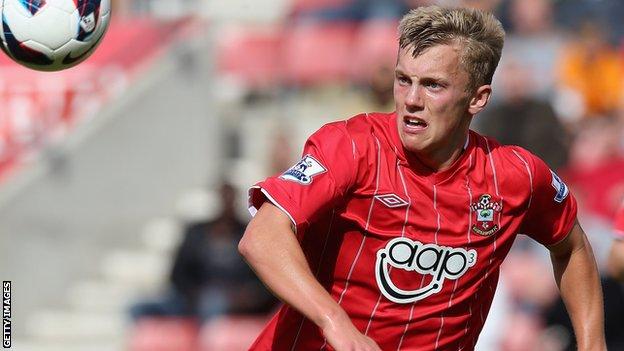 Southampton manager Mauricio Pochettino says he is committed to promoting young English talent at the club.

A national newspaper study on Monday revealed the opening weekend of the Premier League reached an all-time low in terms of Englishman starting games.

Saints fielded four players against West Brom at the weekend from their famed academy, while eight of their matchday squad were English.

We always keeping an eye out on the market but it clear we've achieved our goals, which was to reinforce every single position in the starting 11, so we are very pleased

Southampton's academy has also produced Arsenal winger Theo Walcott and Welshman Gareth Bale, who is set to become the most expensive player in the world.

Saturday saw them field Adam Lallana, James Ward Prowse, Luke Shaw and Callum Chambers and Pochettino says despite the arrivals for Dejan Lovren, Victor Wanyama and Daniel Osvaldo, the club will continue to place an importance on fielding players from their academy.

"We have a significant project of getting young players into the first team," he said. "And of course the young players will always have a chance within our structure."

One such player is Ward Prowse who Pochettino hinted will be the main beneficiary of Jason Puncheon's departure to Crystal Palace on loan.

Pochettino confirmed Puncheon joined Palace on loan for "personal reasons" but also that the arrival of Osvaldo could see him alter their formation.

"With the arrival of Dani Osvaldo, Puncheon realised his chances of getting in the team were greatly reduced," he added.

"Ward Prowse played very well at West Brom. He has the technique and the ability to play anywhere in midfield, so we are very happy and pleased with him and hope he continues the trajectory he is on."

Meanwhile, Pochettino has confirmed that the club's record signing Osvaldo is fit to play after his arrival on Monday and also says he could be involved at the weekend against Sunderland.

The Argentinian hinted the club would not be adding any more players before the end of the transfer window after a summer of heavy investment.

"Dani is fit, he played an international match last week but he needs to integrate himself into our structure and learn how we play.

"We always keeping an eye out on the market but it clear we've achieved our goals, which was to reinforce every single position in the starting 11, so we are very pleased."