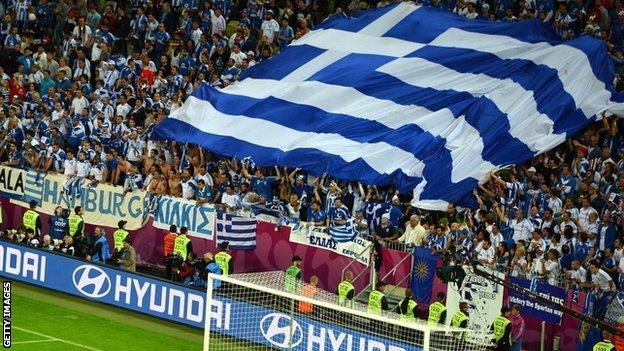 Daniel Lloyd-Weston had only been at his new club in Greece for three days when he was handed an envelope stuffed with nearly 3,000 euros in bank notes.

For a 19-year-old reserve goalkeeper, at a second-tier team, this was a princely sum.

But was this a signing-on bonus? An advance? The money he was promised for an apartment and a car?

Lloyd-Weston had joined Kalloni on the advice of family friend Nikos Galas, a Greek footballer who had started his career at his local club and was returning to the island of Lesbos after trials with a few British clubs.

"I was hit with bills I couldn't pay. But I was sad to go. In terms of football, it was great and those leagues are very underrated"

Lloyd-Weston was also looking for regular football after coming through the academies at Crewe Alexandra and Stoke City, and spending stints in the reserves at Port Vale and Cheltenham Town. An affable sort, with an adventurous spirit, Lloyd-Weston was also up for the challenge of learning a new language and experiencing a different football culture. He definitely got that.

The Manchester-born keeper was certainly not at Kalloni for the money. Having signed a two-year deal on a basic salary of 250 euros a week, he knew he would not be returning from Greece with riches. But he did expect to be able to pay his bills.

Sadly, that early envelope was not a sign of things to come. The club apartment and car never materialised - he sorted both out himself - and when a director turned up at training five months later to tell the players that results were not good enough and everybody was being docked 30% of their pay, Lloyd-Weston was already owed almost 2,000 euros in wages.

By the end of the season, despite enjoying his football, the Englishman was forced to tell his club he could not afford to stay.

This week, Fifpro, the international federation of national players' associations, advised players to think twice about joining clubs in Cyprus, Greece and Turkey, particularly clubs without European football to fill their coffers.

"(Clubs in those leagues) do everything possible to win players over, offering them fabulous wages, a luxurious home, ambitious plans, bonuses or a percentage of future transfer payments," said Fifpro.

"Unfortunately, many don't keep these promises. Generally, after a few months, the club turns out to be short of financial resources, so the player has to wait months to be paid.

"Very often, he never collects. Some players have to abandon their homes because the club cannot or will not continue to pay their rent. And bonuses are never mentioned again."

Fifpro went on to note that Cyprus leads the way in non-payment complaints, with some cases taking two years to be heard by Fifa's "dispute resolution chamber". Greece and Turkey vie for second place in the cheques-in-the-post league.

The advice from Fifpro on moves to these leagues was relatively neutral compared to an earlier warning from the Dutch players' association. "Don't do it!" was VVCS director Louis Everard's to-the-point remark, based on his experience of one in two Dutch players in those leagues being owed money.

This follows a damning report into club football in 12 eastern European leagues, including Greece, which Fifpro published last year.

Based on responses from more than 3,000 professionals, the "Black Book" said four in 10 players are often paid their wages late, with more than half not paid bonuses on time.

The majority of these players are not the millionaires of popular stereotype. They are far more likely to be guys like Lloyd-Weston: young men with mundane bills to pay. And if they are not paid on time, they become far more vulnerable to the match-fixing advances of organised criminals.

"A player who has to wait for his money has a greater chance of being approached to manipulate a match," the 180-page study explained.

More than one in 10 players surveyed said they had been asked to fix a match. Fifpro's research showed this increases the longer the non-payment of wages continues. More than half of those approached by criminals to fix games are owed money by their clubs.

Bobby Barnes, the deputy chief executive of the Professional Footballers' Association in England, said it was common knowledge there were problems in these leagues, particularly in Cyprus and Greece, although he said much of this was down to the economic crisis in those countries.

"We have had a few cases where players have been promised a lot only for the clubs to run out of money, fold, or get merged," said Barnes.

"I have a degree of sympathy for them, to be honest. The economic situation is tough, and their player associations do their best to resolve these issues.

"But my advice to players would be to get as much money as possible up front - there is a good chance that you are not going to get paid what they said they would pay you."

In the last 18 months, he has taken eight non-payment cases to Fifa, five of them involving Greek clubs, and for him it is essential that players' agents make sure Fifa is the final arbiter in any dispute, and not the national FA. That must be stipulated in the contract.

But Ioannides was keen to place this issue in context.

"(Fifpro's) concerns are justified - it definitely goes on, too many times, and I have received a fair amount of complaints - but I don't think the situation is out of control," he said.

"It is, though, definitely something Fifa needs to look at."

This echoes Lloyd-Weston's memories of Greece. Now back in England at Hereford United, the former Manchester United trialist says he wishes he had been given more advice when signing his contract. But he does not regret the experience.

"I didn't really want to leave," he said. "But I was hit with bills I couldn't pay.

"But I was sad to go. In terms of football, it was great and those leagues are very underrated."

Underrated, under-resourced and now, it seems, under the microscope.