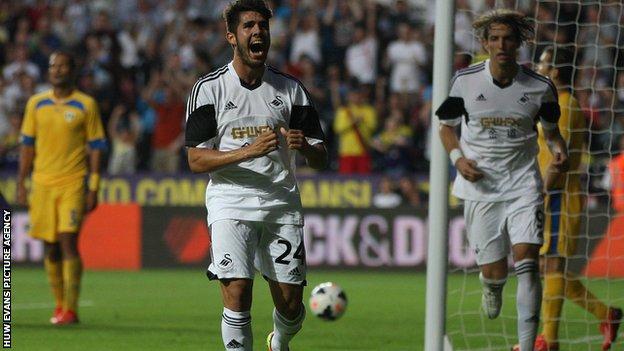 Michael Laudrup says Swansea have not yet qualified for the Europa League group stages despite a 5-1 first-leg play-off win over Petrolul Ploiesti.

Wayne Routledge scored twice, with Michu and Alejandro Pozuelo getting a goal apiece, while Ploiesti goalkeeper Peterson Pecanha put into his own net.

Swansea play the away leg in Romania on Thursday, 29 August.

"We have one foot in the group stage but we have to finish the job," said City manager Laudrup.

"I said that in Sweden [after Swansea had beaten Malmo 4-0 at home in the previous round] before that game and we finished the job. It wasn't a very exciting game but we had done our job in the first game.

"We will say the same next week and we are going there to finish the job.

"We are on our way, it's like the first game against Malmo, and we have one foot in the group stage and the next round."

This season's Europa League is the Swans' first continental campaign since the 1991-92 season and the Romanian Cup holders simply had no answer to the Welsh side.

The tie was effectively over after the first 25 minutes as Routledge slotted home his first-half double, with Michu also adding his goal to give Swansea a 3-0 half-time lead.

Wilfried Bony added to the visitors' pain in the second half when goalkeeper Pecanha fumbled his shot into his own net, before Pozuelo burst off the bench to give Swansea a fifth goal.

Gheorghe Grozav did hit a late consolation for the visitors but a four-goal advantage should be more than enough for the Swans.

Swansea, who qualified for the Europa League by defeating League Two side Bradford 5-0 in last season's Capital One Cup final, remain unbeaten in their three opening games in the tournament.