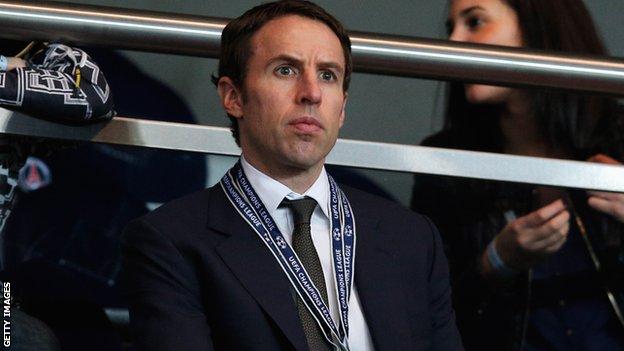 Former Middlesbrough manager Gareth Southgate has been named England Under-21 boss on a three-year contract.

Southgate was previously the Football Association head of elite development, leaving the post in July 2012.

"I'm extremely excited about the prospect of working with the best and brightest young players in the country," the 42-year-old said.

Southgate made 57 appearances for England during a career in which he played for Crystal Palace, Aston Villa and Middlesbrough.

He featured at Euro 96, missing the crucial penalty in the semi-final defeat by Germany at Wembley, the 1998 World Cup and the European Championship in 2000.

"I'm a proud Englishman and playing for my country was the pinnacle of my playing career," said Southgate, who managed Middlesbrough from June 2006 to October 2009.

"Since retiring as a player I have gained a lot of knowledge and experience of the game both here and abroad, and I'm eager to play my part in preparing players to compete at the highest level.

"Whenever any team steps onto the pitch for England, being successful is of huge importance, but it is also about developing a clear style of play that can allow our talented young players to flourish."

Southgate was part of England's coaching staff at the Under-20 World Cup in 2011 and has been working as a pundit for ITV.

He will report to the FA's director of elite development Dan Ashworth and will oversee the coaches with responsibility for the under-16s through to the under-20s.

Ashworth said: "Gareth shares our belief that now is an important moment for English football. It is the time for change and his ideas and experience will be crucial to the direction we wish to take the development teams in the future."

Southgate's first game in charge will be the 2015 European Championship qualifier against Moldova on Thursday, 5 September at Reading's Madejski Stadium before his team face Finland away four days later.

England manager Roy Hodgson took charge of the last under-21 game, a 6-0 defeat of Scotland at Bramall Lane.