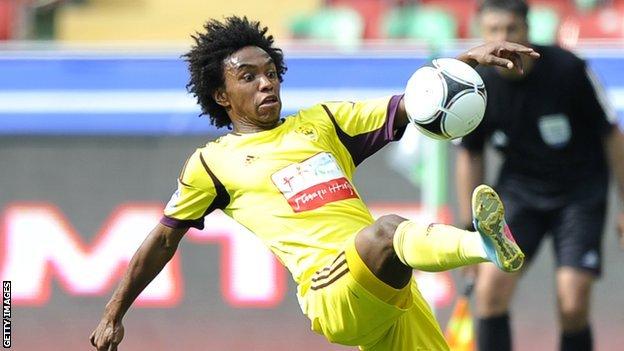 Chelsea have entered the race to sign Willian despite the Brazil international having a medical ahead of a proposed £30m move to Tottenham.

Spurs hope to complete a deal for the 25-year-old but face competition from their London rivals, who can offer Champions League football.

The Anzhi Makhachkala midfielder has also attracted interest from Liverpool.

If Spurs pull off the signing, it would be the third time this summer they have broken their transfer record.

Speaking after Tottenham's 5-0 Europa League win over Dinamo Tbilisi, boss Andre Villas-Boas said: "We were involved in the game so, unfortunately, I cannot give you further information to what is happening.

"I confirmed [on Wednesday] there was interest in the player, if something happens... everything is possible. I'm not aware of all the circumstances because of our involvement in the game. Neither did I want it to be a distraction for what we achieved tonight."

In July, Tottenham signed Brazil midfielder Paulinho for a fee of just under £17m from Corinthians and earlier this month they spent £26m on Valencia's Spain striker Roberto Soldado. Before this summer, their record fee was the £16.5m paid for Darren Bent from Charlton in 2007.

Chelsea have been less active in the transfer market with the £18m signing of forward Andre Schurrle from Bayer Leverkusen their most expensive signing.

Blues manager Jose Mourinho has seen two bids for Manchester United striker Wayne Rooney rejected by the Premier League champions, but the Portuguese boss said they would make a further attempt after the two teams play each other on Monday.

Chelsea already have a wealth of attacking midfielders such as Juan Mata, Oscar, Eden Hazard and Victor Moses with Kevin De Bruyne returning from a loan spell with Werder Bremen last season.

Willian joined Anzhi in January for a reported £30m after five-and-a-half seasons at Ukrainian club Shakhtar Donetsk but he has become available as Anzhi attempt to cut costs after a change in strategy by their owner.

The signings come amid continuing rumours about Gareth Bale's future at Spurs. The Wales forward, 24, has been ruled out of action for two weeks by a foot injury, but speculation continues that Real Madrid will make a formal £80m move.