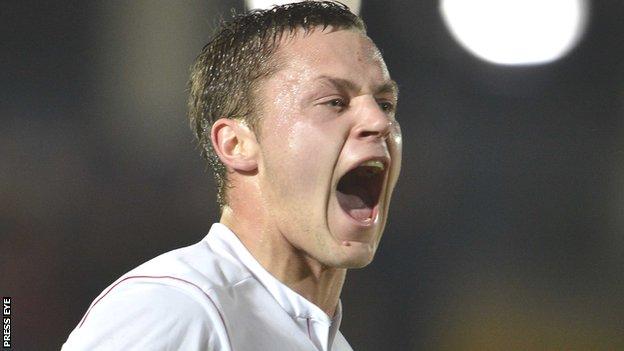 Johnny Black has joined Portadown in a short-term deal and he could make his debut in the league game against Ards.

The former Coleraine and Linfield full-back, who will leave for Australia in a few weeks, has been brought in as cover amid a Shamrock Park injury crisis.

Crusaders host Linfield at Seaview with both teams seeking a first victory in the new Premiership campaign.

I'm very pleased with the effort and commitment, workrate and desire

Blues midfielder Philip Lowry has been ruled out for several weeks after suffering a hamstring injury.

The Crues have lost their opening two games while Linfield were beaten by champions Cliftonville last weekend after drawing with Portadown.

"For us as a group, we've got to learn from the mistakes that we made last week - we have almost a brand new group of players with 11 having gone out and eight coming in," Blues boss David Jeffrey told the club website.

"We know this is very much a work in progress but we were taught a very harsh lesson by obviously a well formed Cliftonville team on how to clinically punish mistakes.

"There are lessons for the players. I'm very pleased with the effort and commitment, workrate and desire.

"Crusaders will obviously be smarting having lost their two opening league games to Ballinamallard and Ballymena. Like us, they will be striving to get points on the board.

"After last weekend's disappointment, the players have got their heads back up again and they're very much looking forward to the challenge at Seaview."

Cliftonville are the early pacesetters and they welcome defender Mark Smyth back from suspension for the Stangmore Park clash against Warrenpoint Town.

The Reds are joined on six points by Dungannon Swifts and they are the only two teams with 100% records.

The Swifts are away to Ballymena United, who have Gavin Taggart back from a ban although David Cushley is set to miss out with a knee injury.

Glentoran midfielder Marcus Kane is sidelined for the Oval game against Ballinamallard because of a hamstring injury, and Jason Hill has been drafted into the squad.

The Glens have been boosted by the signing of striker Aaron Boyd, who has agreed a one-year deal.

Boyd, who has recently returned to Northern Ireland from Canada will miss the next few games as he and the club await international clearance.

Aaron has been previously with Linfield, Coleraine, Ballymena United and Lisburn Distillery.