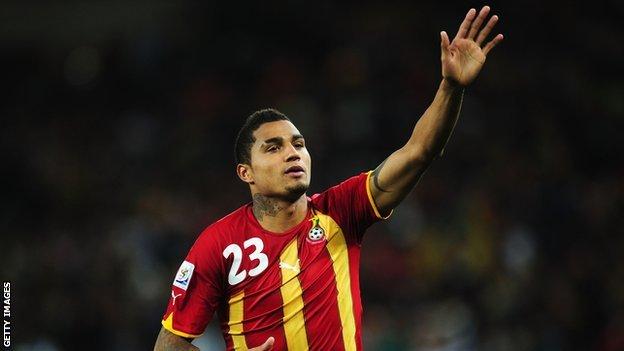 Kevin-Prince Boateng and the Ayew brothers, Jordan and Andre, officially confirm they are are all available for international football again with immediate effect in letters to the Ghana Football Association.

It means the trio could make their returns against Zambia in a crucial 2014 World Cup qualifier on 6 September.

"After a few consultations, I have decided to change my decision and confirm my availability to play for the Black Stars whenever I am needed," Boateng's letter stated.

Boateng was born and raised in Germany but opted to play for Ghana and switched his international allegiance in time for the 2010 World Cup after persistent snubs by Germany.

The controversial star then went on to play a major part in Ghana's run to the quarter-finals of the tournament in South Africa.

However, he has not played for the Blacks Stars since October 2010 when he retired from international football after winning only nine caps.

Ghana coach Kwesi Appiah has already indicated he will select the Milan star Boateng after the player has served an official notice to the GFA.

And the GFA said it is delighted with Boateng's decision to return claiming it will "surely re-energise the Black Stars for our future challenges".

The Ayew brothers turned their backs on Ghana in February this year in a row with the side's management team.

All three players had already announced their willingness to play for Ghana again, but were not included in a recent friendly against Turkey because they had not officially rescinded their retirement announcements.

Menawhile, Boateng's Milan team-mate Sulley Muntari has also written to the GFA to apologise for an unspecified incident after Ghana's 2-0 win over Lesotho in a World Cup qualifier in June.

"I write this letter to render my sincere apologies to the Management, Technical Team and the entire players of the Black Stars for my behaviour after the Lesotho/Ghana match," his letter read.

The GFA has accepted the apology "over an incident that happened in the dressing room after the Ghana Lesotho game in Maseru".

"It is our hope that we will work together with harmony to ensure the continuous progress of our beloved national team of Ghana, the Black Stars," the response concluded.

Ghana need only a draw in Kumasi against Zambia to win Group D and advance to the final round of Africa's World Cup play-offs.