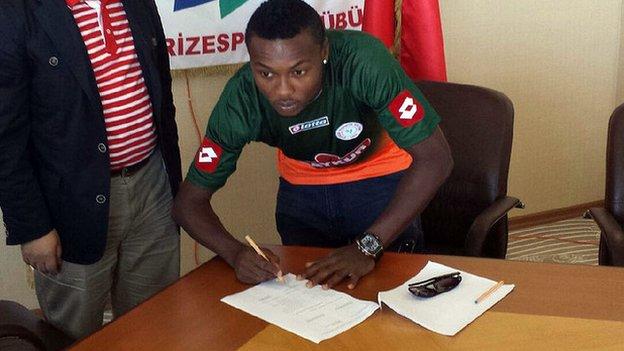 Godfrey Oboabona expressed his delight at securing a "dream" move to the Turkish league as he was unveiled as Caykur Rizespor's new signing on Thursday.

The Nigeria international defender, who has joined from Sunshine Stars for 650,000 euros (US$870,000), revealed that his new club's ambition was a big factor in persuading him to move to Turkey.

"It's a big decision and a dream move, too," Oboabona told BBC Sport.

It's been a fantastic year for me, the next step is to achieve more success at club level

"I had offers from England, Germany, Spain and Ukraine, but Rizespor has an attractive project that will be good for my development.

"God has been good to me. My desire is to be a successful footballer and this club is a good place to start my European career.

"Some people suggested that I should go here and there, forgetting that to progress you need to be playing regularly and enjoy motivation.

"I believe in my own ability, this is a start point for me and a step to bigger and greater things in life."

Oboabona signed a four-year contract after passing a medical on Wednesday.

The 23-year-old has been a regular for the Super Eagles since Stephen Keshi took over the national team in 2011, and he was quick to acknowledge the role of the former Nigeria captain in his meteoric rise.

"I must thank my club and also the big boss (Keshi) for the opportunity to fulfil my football dream," said the centre-back.

"He is a great motivator, a father figure who appreciates and encourages you to be a better player."

After winning the Africa Cup of Nations in January and playing an integral role as Nigeria secured a place in next year's African Nations Championship in South Africa, Oboabona is eager for fresh success.

"It's been a fantastic year for me, the next step is to achieve more success at club level," he added.

"I want to repeat that and improve as well. I'm confident that will happen and I can't wait to start here."