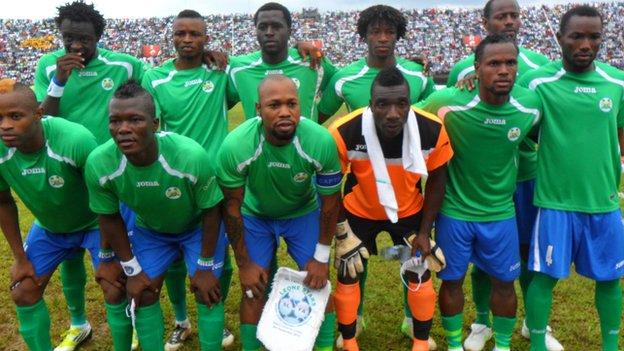 Sierra Leone international Ibrahim Teteh Bangura is hoping to "resurrect my career" in Israel after signing for top-flight league club Beitar Jerusalem on a season-long loan.

The 23-year-old striker joins Beitar from Turkish outfit Bursapor after he passed medical tests on Thursday.

The deal comes a few days into the start of the Israeli new season and Bangura becomes the first Sierra Leonean to be signed by an Israeli top division club.

Bangura has struggled for Bursaspor since joining from former Swedish champions AIK Stockholm two years ago. He spent the second half of last season on loan to Turkish second tier league club Sanlıurfaspor.

Bangura is now hoping to put his problems behind him and make an impact for Beitar.

"I'm very happy for the move as I'm now fit, free from injury," Bangura told BBC Sport. "This is an opportunity for me to resurrect my career and I'll try very hard to give my best for Beitar Jerusalem.

"I hope to return to Bursaspor a better player after the loan move and do what I'm known for scoring goals.

"You never know what'll happen after the loan move but for now I want to concentrate on my new challenge.

"I don't know a lot about Israeli football but I know Nigerian player Yakubu Aiyegbeni had played there before. I believe the Israeli top division league is a good league."

Bangura caught the eye of Bursaspor and other clubs around Europe two years ago with his goal-scoring exploits at AIK - netting 15 times in 17 appearances in his debut season.

He joined AIK Solna in January 2011 from a Swedish lower league team Koping FF, where he scored 12 goals in 11 appearances.