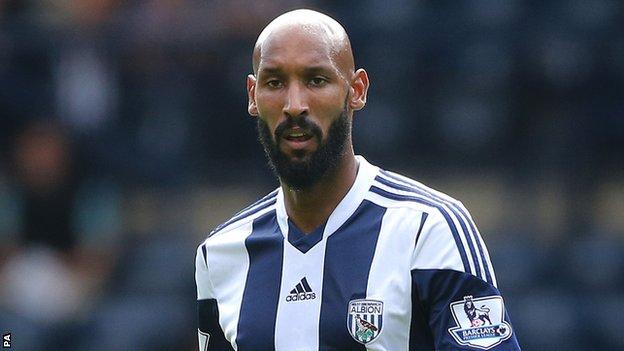 Nicolas Anelka has told West Brom he could retire following the death of his agent, but manager Steve Clarke hopes the striker will return to action.

The summer signing will sit out Saturday's game at Everton after being given compassionate leave.

When asked if the 34-year-old said he planned to quit, Clarke said: "I'm not going to deny that he used that word.

"But we've given him time to go away and think about it. I don't think we could do more in the circumstances."

Following the news that Eric Manasse had died, the much-travelled Anelka said on his Facebook page: "I cannot find the words to express my sadness."

Clarke revealed the 69-times capped France international left training on Thursday after conversations with himself and technical director Richard Garlick.

"Nicolas went to Richard on Thursday and indicated that he wasn't in a good place," the Scot said.

"I went in and had a very brief chat with him, and he wasn't in a good place. So the club have decided just to give him a bit of time to go away and think about it and get himself in a better place for the future.

"That is as much as there is to tell on the situation. It wasn't dramatic, there was no big bust-up, he didn't storm out of the training ground. It is just a boy who is really quite upset."

Anelka joined his sixth Premier League club when signing a one-year deal with West Brom in July after spending the latter half of last season at Italian champions Juventus.

After scoring seven goals in as many pre-season games, he made his competitive debut for his new club in last Saturday's 1-0 Premier League opening weekend defeat by Southampton.

When asked if he fully expected the player to return, Clarke said: "I don't know, because from the conversation we had the other day, it was really negative.

"But as I said, we have given him time to think about it. So I'd like to think he could play for West Bromwich Albion again."

Anelka claimed Premier League titles with Arsenal and Chelsea, and has also played for Liverpool, Manchester City and Bolton.

He won the Champions League in 2000 with Spanish giants Real Madrid.