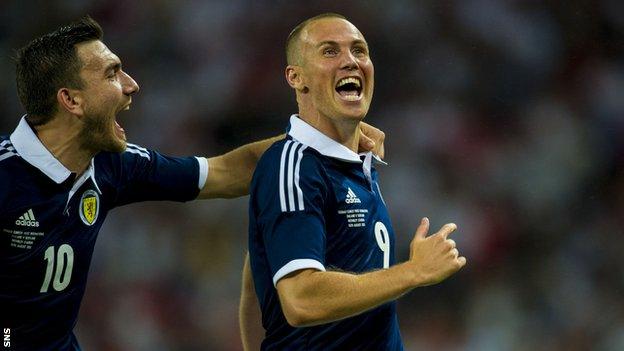 Scotland striker Kenny Miller has retired from international football, despite manager Gordon Strachan hoping the 33-year-old would stay on.

Miller scored the last of his 18 goals for his country in this month's 3-2 defeat by England at Wembley.

Strachan said working with Miller had been "a pleasure".

"I did try to convince Kenny to give it another year, but really that's not fair, it's been a huge decision for him and he's left a legacy," he added.

First capped in 2001, Miller, who plays for Vancouver Whitecaps, made 69 appearances for Scotland.

"Kenny's finished on a high and his hard work and intelligence paid off at Wembley," explained Strachan.

Miller, who began his career at Hibernian, counts Celtic, Rangers and Wolves among his former clubs.

He made his Scotland debut on 25 April 2001 in a 1-1 friendly draw with Poland, scoring his first international goal in earning his second cap almost two years later, in a 2-1 Euro 2004 qualifying win over Iceland.

The striker entered the International Roll of Honour in October 2010 after winning his 50th cap in a Euro 2012 qualifier against Czech Republic.

Strachan described Miller as a "talented player" who gave his all for Scotland.

"In my time as national coach it has been a pleasure to have a player with his ability and experience in the squad," added the Scotland boss.

"He has come to this decision to help prolong his club career and feels that this is the best time bow out.

"We understand his decision and wish him all the best for the future."