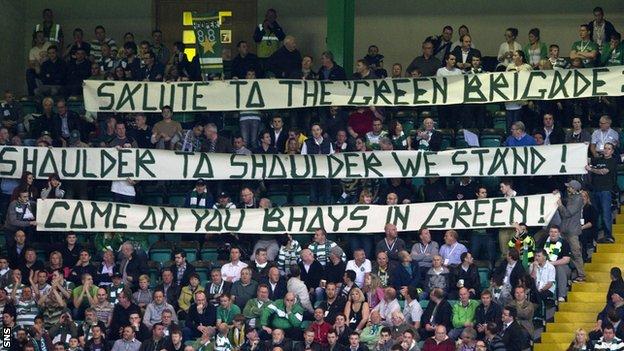 Celtic have suspended a plan to relocate supporters in section 111, known to house the "Green Brigade".

Fans in the section were expected to be offered a refund or given the chance to relocate after ignoring safety concerns.

However, the club decided to halt the relocation following talks with fans.

In a statement, Celtic said they had received assurances from fans and would monitor behaviour on a "match-by-match" basis.

The Green Brigade is a self-styled "ultras" group of fans known for banner displays and chanting.

Earlier this month, the club highlighted unsafe "lateral movement of spectators" and "body surfing", along with damage to 190 seats in the area over the last four home matches.

Celtic said there were concerns over the club receiving a safety certificate for the stadium.

However, the club said on Friday: "Following extensive and positive discussions with supporters' representatives for the section, the club has received assurances relating to previously raised safety concerns and unsafe behaviour within the stadium.

"Celtic has engaged with the Glasgow City Council Safety Advisory Group regarding this matter and they have noted these assurances.

"This matter will be monitored on an ongoing, match-by-match, basis by both the club and the safety advisory group.

"Celtic Football Club would like to re-iterate its commitment and responsibility to ensuring the safety of everyone who visits Celtic Park. It is our absolute priority.

"The club is pleased to have engaged in positive dialogue in relation to this matter.

"We thank the safety advisory group and supporters' representatives for their continued co-operation and we look forward to working together to ensure a safe environment in the stadium."

At a recent Champions League qualifier against Cliftonville, pyrotechnics were set off during the match requiring a stadium announcement instructing fans to desist from such behaviour.