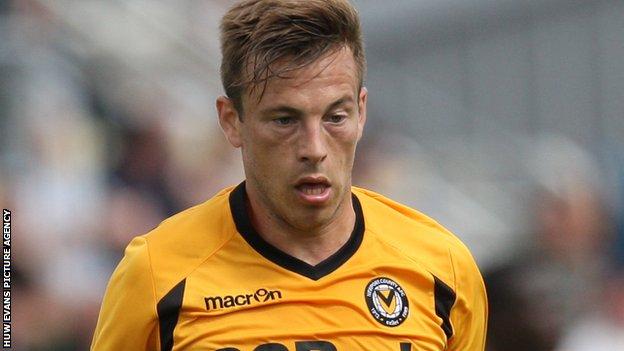 Porter has been troubled by a long-standing groin injury which limited his appearances last season.

"Max has seen a surgeon and it's not particularly good news," Edinburgh said.

"He's got to have some blood injections so he's going to be out for a good few weeks which is a real blow for us and for Max."

Edinburgh added: "We're going to have to bring a reinforcement in. We're light in that area anyway. We will look to bring someone in."

Former AFC Wimbledon midfielder Porter missed the second half of last season because of the injury.

However the 26-year-old returned for the start of the League Two season an played in Newport's matches against Accrington and Northampton.

"It's tough for him but he's a strong lad," Edinburgh said

"He's a top professional and he's worked tirelessly over the summer to get himself back.

"I'm really disappointed for him and certainly for us as a team we're going to miss him."

Porter's injury is the latest blow for Newport, with defender Byron Anthony out out of action until January.

Anthony suffered a double fracture of his right ankle during Newport's 3-1 Capital One Cup win at Brighton on 6 August.

Mike Flynn and Tony James are back in full training while striker Aaron O'Connor is still recovering from a groin injury.

"He's doing a lot of rehab in the swimming pool and we're hoping it's not going to be too far away before he's back in training and playing."