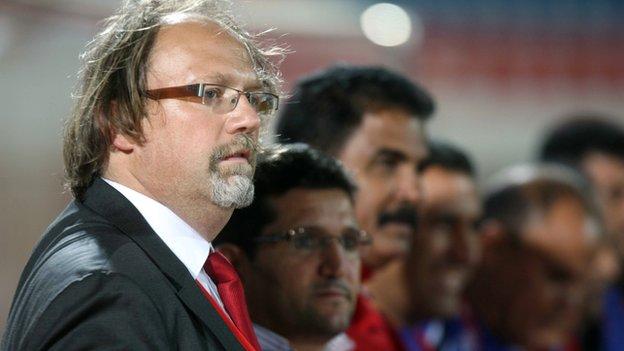 Malawi coach Tom Saintfiet is to report Stephen Keshi to Fifa after the Nigeria coach called him "a white dude who should go back to Belgium".

The pair have been arguing since Malawi asked Fifa to move next month's crucial World Cup qualifier from Calabar for safety reasons.

Saintfiet told BBC Sport: "It is unacceptable that any person says these words - it is clear racism.

"It is 100% sure that my lawyers will lodge a complaint with Fifa."

The row erupted earlier this month when the Football Association of Malawi (FAM) wrote to Fifa, seeking a new venue for their 7 September Group F qualifier away to the Super Eagles - a match which Malawi, who trail Nigeria by two points, must win to progress to the play-offs.

Belgian Saintfiet told local media at the time that he was concerned about security because he claims "the UK's Foreign & Commonwealth Office says it is a no-travel area".

Keshi hit back shortly afterwards, saying "this is where we play our games and other countries are fine with that".

And the Nigerian Football Federation complied with Fifa's request for a written guarantee that the game would go ahead safely.

Keshi has now followed that up with comments on UK-based African TV show, Vox Africa's Sports360, saying: "I think the coach of Malawi is crazy.

"I have never used any words like these to any coach. He has no right, who is he?

"All other countries play in Calabar. Calabar is one of the safest places in Nigeria... He is mad. I wish I could say it to his face."

Saintfiet, who married a Zimbabwean earlier this year, told BBC Sport he is "shocked" by Keshi's comments and he believes the former Nigeria captain's words could also lead to trouble at the qualifier.

"These words create hate and aggression, and creates a risk ahead of the match in Calabar," Saintfiet added. "These comments are unacceptable and I am very sad about them.

"I will not say any bad words about Mr Keshi, nor Nigeria - I only spoke about moving the game.

"If Fifa takes racism seriously, then you have to take it seriously in both directions. If a European said something of this nature about an African, you would have a huge problem.

"I am against racism in all directions."

Saintfiet believes Keshi "is angry because of the request to change the venue", but the Belgian stands by his feeling that Calabar is unsafe.

"If Fifa says it's ok (for the match to be played in Calabar) because Nigeria will provide anti-bomb squads, then surely this is a problem at the beginning.

"If you need anti-bomb squads, you cannot consider the area safe. It is designated a non-travel area, high-risk area.

"We are not insulting anyone."