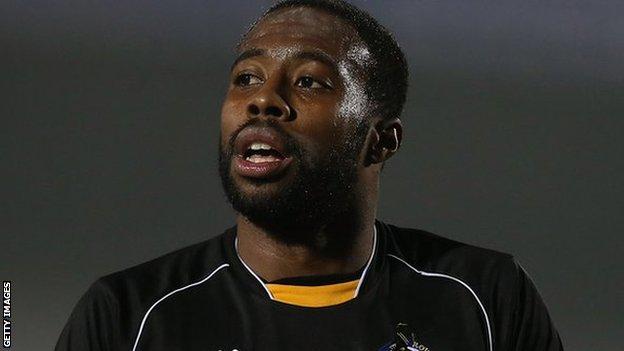 The 28-year-old forward trained with Wrexham during pre-season following his release by Bristol Rovers.

Anyinsah, who has signed a one-year contract, is available to play after receiving received international clearance.

"[I'm] really pleased with him so far, whether he starts or not we'll decide that [on Saturday]."

"He hasn't had much football and has been training with us and looks good.

Wrexham will have defenders Stephen Wright and Neil Ashton available for Saturday's second home game of the season.

Wright returns after being suspended for the draw at Tamworth while Ashton has recovered following illness.

The 31-year-old played in the opening day win over Welling United but missed the games at FC Halifax and Tamworth.

The former Kidderminster and Oxford United player was sidelined for 10 months last season after suffering a serious knee injury.

"We're awaiting the results and I'm hoping there's a fax winging its way to us to tell us what's the matter," Morrell said.

"We'll be able to assess that after that."

Morrell is pleased with the progress of captain Dean Keates, who has missed the opening weeks of the season following a toe operation.

"I'm hoping in a week or so he'll be out on the pitches running doing a bit of ball work," Morrell said.

"That will be progress in itself for him."