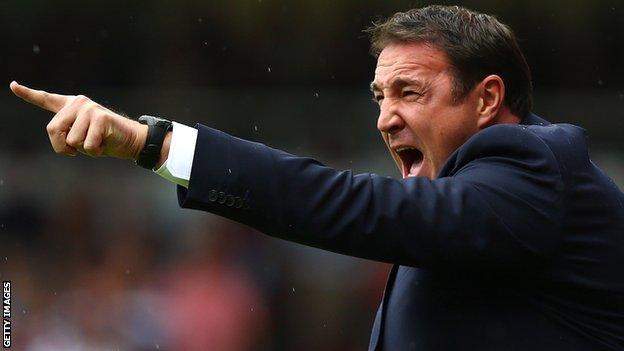 Manager Malky Mackay is relishing taking on one of the Premier League title favourites on Sunday, when

The Bluebirds lost their opener at West Ham and the Blues hammered Newcastle United under new boss Manuel Pellegrini.

Mackay said: "You see the way that team played, they are warming to their new manager quite quickly.

"So we realise the task in hand."

I have no doubt the way our fans will be this season in terms of their ferocity, support and passion

Having dominated the 2012-13 Championship on their way to the top flight and not lost at home since February of last season, Mackay hopes home fans will be as influential this time around.

He said: "We have got to try and make our stadium a fortress

"We have to make sure that it is a tough ask for any team that comes down to our stadium.

"I have no doubt the way our fans will be this season in terms of their ferocity, support and passion for our club and the way our stadium is, it will lend itself to noise, like we had last season.

"We will have tough teams coming, top teams coming here and it will be a test for us, but we are relishing that."

Mackay's keen interest in how Pellegrini's side fared against Newcastle, who had Steven Taylor sent off as half-time approached, led him to describe their display as "excellent".

The Scot was particularly impressed with the strength his Chilean managerial counterpart had to call on from the bench.

"After 20 minutes it was slightly slanted because of the sending off and they played a slightly different formation obviously, but at the same time, the players playing out there were excellent," Mackay said.

"I look at the players they have coming off the bench and the impact they have as well. They are a top team."

Andrew Taylor will be back from suspension and could return to left-back at teenager Declan John's expense.