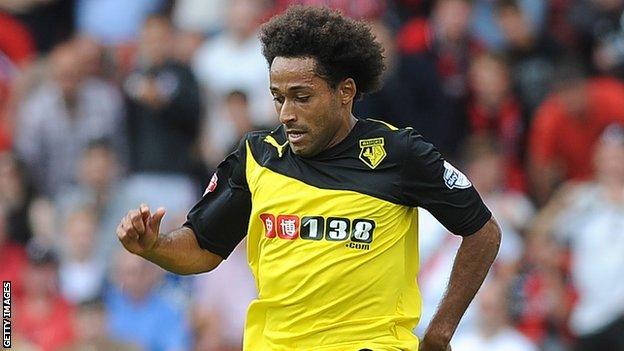 Watford full-back Ikechi Anya could win his first international honour at the age of 25 after being called up by Scotland.

The Glasgow-born player has been named in Gordon Strachan's 27-man squad to face Belgium and Macedonian in World Cup qualifying Group A.

Strachan said: "He's a late developer but is a good prospect for Scotland."

Missing from the squad is Kenny Miller following the .

With the Vancouver Whitecaps veteran departing the scene, Nottingham Forest's Jamie Mackie and Leeds United's Ross McCormack are recalled to the squad.

"Ross McCormack's had a good start to the season and been big in games," said Strachan. "He was unfortunate not to be in the last squad."

Hull City's Allan McGregor is suspended for Belgium's visit to Hampden Park on 6 September, which means Kilmarnock's Craig Samson has also earned a recall as one of four goalkeepers.

James Forrest is a potential early withdrawal following Celtic's announcement that the winger is to see a neurologist in a bid to resolve his long-standing injury problem.

Anya, born of a Nigerian father and Romanian mother, began his senior career with Wycombe Wanderers before spells in non-league football with Oxford City and Halesowen Town.

However, he embarked on a Spanish adventure that took him to Sevilla Atletico, the La Liga side's reserve team, Celta Vigo and Granada.

Following loan spells with Cadiz and Watford, he signed permanently for the English Championship outfit this summer.

"We knew about him at the end of last year and, when any of my friends watched him, they passed on information," said Strachan of the player who can play on the wing or in defence.

"He has got pace, technically he is good, he keeps the ball, so they are good credentials for an international player."

Belgium will arrive at Hampden unbeaten and top of Group A with 19 points from seven games.

The Scots travel to Skopje four days later to face Macedonia, who prop up the section - one point behind the Scots - having played a game less.

Scotland drew 1-1 with Macedonia in Glasgow in September and a 2-0 loss in Brussels the following month led to the sacking of former team boss Craig Levein.