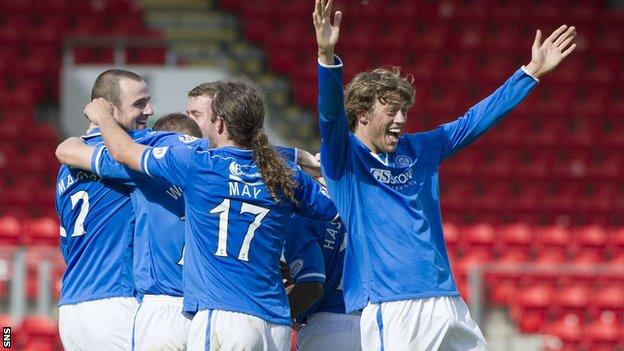 Get stuck in and don't come unstuck.

That's the take-home message from a sit-down chat with Murray Davidson.

He's part of a St Johnstone side that have won seven points from their opening three league games for the first time since 2002-03.

It's a domestic start that's been a perfect antidote to the painful Europa League qualifying loss to Minsk.

And to think that Davidson was so nearly not part of this exciting new campaign for the Perth team.

After his contract expired at the end of last season, the central midfielder intended to explore his options down south.

Ross County's Richie Brittain was the planned replacement until it infamously failed to transpire, leaving a gap for Davidson whose English possibilities had dried up.

"I've always enjoyed it here and I always said if I didn't go down to England I'd speak to St Johnstone again," Davidson said.

"I'm delighted to have signed a year's deal and we'll see where we go from here."

A handsome win over Ross County provided an ideal platform for the former Livingston player to show what he brings to the McDiarmid Park table.

Had it not been for Davidson's bravery and tenacity, Nigel Hasselbaink wouldn't have had the 14th-minute opportunity to deftly flick the ball into the net.

The 25-year-old evaded two challenges on the right-hand-side before playing the ball across for the Dutchman to score.

"It's one of the parts of the game I do enjoy - I like getting stuck in," he explained.

"I can't remember who it was but I've stuck my head in down there and I was in danger of getting a sore one, but luckily it fell to me.

"I heard Nigel shouting, which he's not shy in doing, and I just squared it and it's a great finish.

"That set us up and we didn't rest on that."

Davidson speaks directly, unleashing his answers immediately and confidently. There are no pauses to wrack the brain for a cliché to use.

And you can't help but notice that the length of his curly fair hair is fringing on Stevie May proportions.

Saints' widely admired striker is on three goals already this season and looks to be committed to staying in Perth despite interest from Peterborough.

"Stevie's come back from his two loan spells and he's been excellent," Davidson said.

"I'm aware there's been interest - rightly so because he's been excellent. He's an important player but the 11 that played against Ross County - if you took any of them out, you'd probably miss them.

"If he stays, we'll be delighted because he's a big asset to us."

So where can St Johnstone go from here?

The achievement of third-place in Scotland's top flight from last season will be difficult to reproduce, never mind improve on.

Davidson is extremely positive about manager Tommy Wright and the coaching team, but he refuses to get carried away.

"If we start saying we'll finish second, third, fourth or top six, I tend to find you come unstuck," he said.

"Personally, I've never been one to set targets, I go game-by-game.

"There are probably six or seven teams in a similar position to us looking to get as many points on the board early.

"If we do cement a top-six place, or look like we're going to do that, then we can maybe start looking ahead like last year."

Getting stuck in and don't come unstuck. Might have known Davidson's target would be to try and cement something.