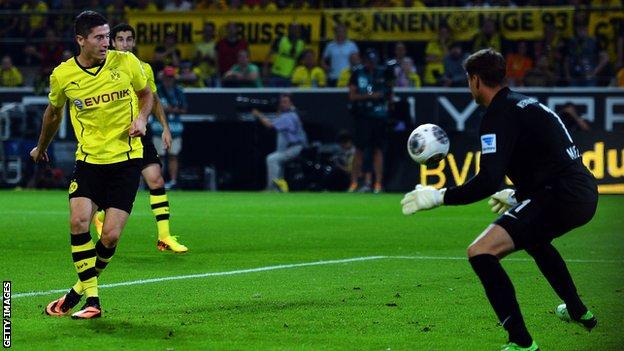 Robert Lewandowski scored his second goal in three games as Borussia Dortmund maintained their perfect start to the season by beating Werder Bremen.

The Polish striker tapped home from Marco Reus's cross in the second half.

Dortmund had chances to extend their lead as Nuri Sahin volleyed over before substitute Pierre-Emerick Aubameyang was denied from close range.

Former Wigan striker Franco Di Santo came closest for the visitors, but his powerful drive was kept out late on.

The victory means Dortmund have won their opening three games of the season for the first time since 2001-02, when they went on to win the title.

Borussia Dortmund were playing Werder Bremen 49 years and 364 days since they met in the first-ever Bundesliga match back in 1963. In the 91 meetings since then only three have ended in draws.

Bayern Munich were the runaway title winners last season but Dortmund's early season showing suggests the battle for the championship could be a closely-fought affair this season.

They dominated from the beginning of this encounter, but failed to make the most of a host of chances.

Jakub Blaszcyzkowski came closest to breaking the deadlock as he smashed a shot against the crossbar, with Bremen sitting deep inside their own half.

Dortmund found the breakthrough 10 minutes into the second half when Reus's square ball found Lewandowski yards in front of goal and the Poland international was left with a simple finish.

Sahin volleyed over following a scramble in the box and Aubameyang, who scored a hat-trick on his Bundesliga debut earlier this month, saw a low shot denied by Bremen goalkeeper Sebastian Mielitz after racing towards goal.

For all their dominance, Dortmund were almost denied victory late on when Di Santo had sight of goal, but his powerful drive was denied by keeper Roman Weidenfeller.

"In a way it was good that we didn't score earlier, because it would have taken some of the fire out of the players," said Dortmund coach Jurgen Klopp.

"This way, they had their feet on the gas for the whole 90 minutes. Having nine points after only three games and talking about how we can improve is almost a luxury problem.

Klopp added: "I am happy that Lewandowski scored. He was rewarded for having worked as hard as a bull tonight."

"The allegations against the Royal Blues concern the alleged display of political banners, crowd trouble and late submission of team sheets," Schalke said in a statement on their website.

The club confirmed they are seeking legal advice and will plead not guilty.